BLOG TOUR - The Ex Between Us 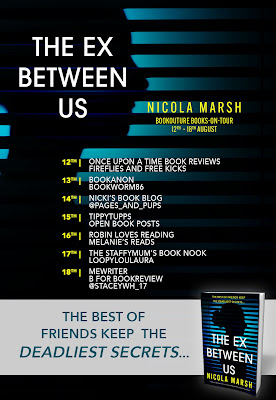 DESCRIPTION:
You can always trust your friends. Can’t you?Abi is starting a new chapter of her life. Her son is leaving for college, she has her dream job and she is finally ready to find love again after her relationship with her ex Cal has ended.Jo has been by Abi’s side for years. They’ve navigated all of life’s ups and downs together. Even when Abi betrayed Jo with Cal all those years ago, she forgave her and the three remain close.So when Abi starts dating again, Jo and Cal begin to spend more time together. But soon Jo receives threatening messages telling her to stay away from him. And when Abi comes to her terrified, clutching a note that says “I want your life,” it becomes clear that someone wants to cause the friends harm.Because in Jo and Abi’s close-knit circle someone has been living a lie for years and it’s about to come to light. But when it does, who will make it out alive?

An utterly addictive psychological thriller which is packed with twist after twist from the USA Today bestselling author of My Sister’s Husband. Perfect for fans of K.L. Slater, The Wife Between Us and Gone Girl. 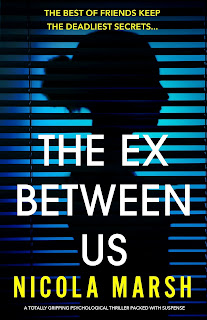 Title:   The Ex Between Us
Author:  Nicola Marsh
Publisher:   Bookouture
Genre:   Psychological Thriller
Format:  Kindle ARC
No. of Pages:   338
Date of Publication:   August 16, 2022
My Rating:   5 Stars
Jealousy. Revenge. Obsession. Pranks and sabotage that are ratcheting in intensity. The question as to motive is definitely something one might wonder while reading this incredible psychological thriller by Nicola Marsh.
There is Jo and and there is Abi. At least one of them is unlikable from beginning to end in this addicting read. Both are the victims of sabotage. Determining who is responsible leads to that question of motive. How far will it go?
The story itself begins when Jo’s son Robbie leaves for college. Jo and Abi were best friends during their school years when something that had lifelong consequences ended that friendship, leaving Abi furious with Jo. However, Abi eventually forgave Jo, and became Robbie’s godmother. Even more, Abi moved to where Jo, Robbie and his father Cal lived, and became an extended member of their little family.
For eighteen years, Abi and Jo seemed as close as two BFFs could be. With Robbie leaving the nest, Jo stretches her wings, pulling away from that little family unit. She considers what it is she really wants. Who she really wants. Going to any means possible to get what she wants. Meanwhile, Abi has a new man in her life named Noah. While on the one hand both women might seem on the course of happiness, there are those threats that are affecting each of them.
What a compelling read! Oh, the surprising twists and turns in this utterly engaging novel! With incredible pacing that led to a shocking ending, this book was truly thrilling and impossible to put down. Perfectly titled, perfectly executed, Nicola Marsh has written another winner.
Many thanks to Bookouture and to NetGalley for this ARC for review. This is my honest opinion.
Please enjoy my YouTube video review - 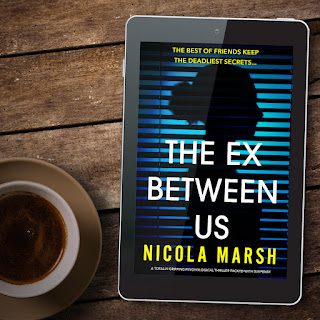 She has published 80 books, sold over 8 million copies worldwide and been translated into 25 languages.

She currently writes contemporary romance and domestic suspense. You can find some of her series romance under the pseudonym Nikki North.

A physiotherapist for 13 years, she now adores writing full time, raising her two dashing young heroes, sharing fine food with family and friends, barracking loudly for her beloved North Melbourne Kangaroos footy team, and her favourite, curling up with a good book!