Review - Neruda on the Park 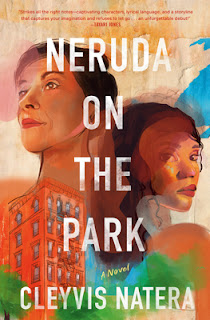 Title:   Neruda on the Park
Author:  Cleyvis Natera
Publisher:  Ballantine Books
Genre:  Women's Fiction
Format:  Kindle ARC
No. of Pages:   336
Date of Publication:   May 24, 2022
My Rating:  5 Stars
DESCRIPTION:
An exhilarating debut novel following members of a Dominican family in New York City who take radically different paths when faced with encroaching gentrification
The Guerreros have lived in Nothar Park, a predominantly Dominican part of New York City, for twenty years. When demolition begins on a neighboring tenement, Eusebia, an elder of the community, takes matters into her own hands by devising an increasingly dangerous series of schemes to stop construction of the luxury condos. Meanwhile, Eusebia's daughter, Luz, a rising associate at a top Manhattan law firm who strives to live the bougie lifestyle her parents worked hard to give her, becomes distracted by a sweltering romance with the handsome white developer at the company her mother so vehemently opposes.
As Luz's father, Vladimir, secretly designs their retirement home in the Dominican Republic, mother and daughter collide, ramping up tensions in Nothar Park, racing toward a near-fatal climax.
A beautifully layered portrait of family, friendship, and ambition, Neruda on the Park weaves a rich and vivid tapestry of community as well as the sacrifices we make to protect what we love most, announcing Cleyvis Natera as an electrifying new voice.
Link to purchase the book
MY THOUGHTS:
Gentrification is a practice that ruins the lives of many. In the case of this book, Neruda on the Park, the Dominican neighborhood of Nothar Park is facing a very difficult time. Developers are offering large cash settlements in order to rid the neighborhood of its long-term residents, with plans of high rises and other things that appeal to the rich.
The Guerreros family have lived their with their other Dominican neighbors for decades. Demolition is going on, and Eusebia Guerreros plans on taking matters in her own hands, going to any extreme possible to bring a stop to these changes. Meanwhile, her daughter Luz is excited that she is about to be made partner at her law firm. Mostly Anglicized, Luz has huge career goals. However, the promotion doesn't happen. In fact, she is fired. No job. No more expensive clothes and shoes. And, if the developers have anything to do with it, no home.
One of the developers named Hudson has caught Luz's eye. The two begin to date despite the huge conflict that lies between them. And, as everything is going on Luz's father Vladmir, works hard with and for immigrants in his job as a police officer. Also, since he and Luz have a secret they share - building a retirement home for him and Eusebia in the Dominican Republic, a cash buyout really appeals to him. So, three people in one small family, all with different goals and aspirations. Will what is going on destroy this family unit?
There are intriguing side stories in this novel, involving Eusebia and the reason for her actions, Vladmir's heartbreaking work experiences, Luz's facing career difficulties, and, of course, the gentrification taking place.
The history that is included in this fabulous debut novel brings my attention to Pablo Neruda and other poets of decades ago show that both Luz and Hudson are erudites, and that is always a treat for me.
This is a debut novel? Indeed it is, but it reads of years of incredible writing experience because that is what Cleyvis Natera gave us readers. Kudos to her for her first book, and she now has a new fan in me.
Many thanks to Ballantine Books and to NetGalley for this ARC for review. This is my honest opinion.
Please also enjoy my YouTube video review -
ABOUT THE AUTHOR: 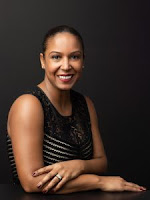