BLOG TOUR - The French for Murder 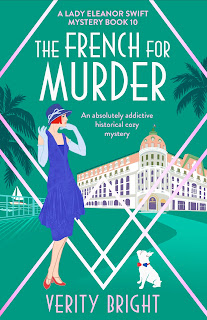 Title:   The French for Murder
Author:  Verity Bright
Series:  Lady Eleanor Swift Mystery #10
Publisher:  Bookouture
Genre:   Cozy Mystery
Format:  Kindle ARC
No. of Pages:   287
Date of Publication:   May 30, 2022
My Rating:   4 Stars
A season at a lovely French villa is anything but a vacation for Lady Eleanor Swift. Just as she is imagining being poolside with a nice glass of wine, her butler Clifford discovers a dead body in the wine cellar. The French authorities do not know much, if anything, about Eleanor and Clifford, so as he found the body, he proves their main suspect and he is immediately arrested.
Eleanor knows one thing for certain: Clifford is no killer. She must prove his innocence to get him released from jail as soon as possible. The victim was American actor Rex Armstrong, and Eleanor must rub shoulders with the cast and crew of the movie being filmed in France in order to look for clues and to try to find the identity of the murderer. She must act quickly, as she wants to get Clifford out of jail immediately.
As Eleanor pieces together clues about the murder, she finds herself further confused after overhearing the director. Who is the killer, and will she not only find said killer in time, but will she do so without finding herself in the killer's crosshairs?
What a delightful cozy mystery story that is part of the truly engaging ten-book series. Each and every book has been quite enjoyable. I love the historical aspect, as it takes place in the 1920s. I also enjoy the "professional" relationship between Eleanor and Clifford, as he was previously her uncle's butler, and his regard and respect for her as he is now her butler straddles on the lines of friendship. Another character that needs mentioning is Eleanor's bulldog Gladstone. He may not have much to offer in the way of advice, but he definitely proves quite a listening ear when it comes to Eleanor's skills of deduction being tested out.
I am thrilled that this series will be continuing at the end of August with Death Down the Aisle. Please check this blog for reviews for any or all of the previous books in this series.
Many thanks to Bookouture and to NetGalley for this ARC for review. This is my honest opinion.
Please also enjoy my YouTube video review -
ABOUT THE AUTHOR: 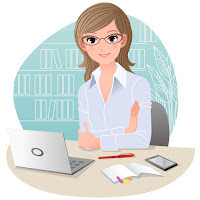 Verity Bright is the pseudonym for a husband-and-wife writing partnership that has spanned a quarter of a century. Starting out writing high-end travel articles and books, they published everything from self-improvement to humour, before embarking on their first historical mystery. They are the authors of the fabulous Lady Eleanor Swift Mystery series, set in the 1920s.
https://twitter.com/BrightVerity
Sign up to be the first to hear about new releases from Verity Bright here: https://www.bookouture.com/verity-bright/