BLOG TOUR - The Songs That Could Have Been 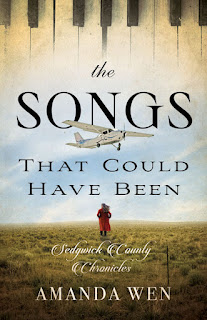 Title:   The Songs That Could Have Been
Author:  Amanda Wen
Series:  Sedgwick County Chronicles #2
Publisher:  Kregel Publications
Genre:   Inspirational Romance
Format:  Kindle ARC
No. of Pages:   272
Date of Publication:   June 21, 2022
My Rating:   4 Stars
DESCRIPTION:
Two couples in love. Two sets of impossible circumstances. One powerful God of grace.
After a tailspin in her late teens, Lauren Anderson's life is finally back on track. Her battle with bulimia is under control, her career is taking off, and she's surrounded by a loving family. Then a chance meeting with Carter Douglas, her first love and the man who broke her heart, leads to old feelings returning with new strength. And suddenly her well-balanced world is thrown off kilter.
Now a TV meteorologist, Carter is determined to make amends with Lauren. After all, she still owns his heart. But the reasons they broke up aren't lost--and those old demons are forcing him toward the same decision he faced in the past. He isn't sure he's courageous enough to make a different choice this time around.
When Lauren's elderly grandmother, Rosie, begins having nightmares about a man named Ephraim--a name her family has never heard before--a fascinating and forbidden past love comes to light. As Lauren and Carter work to uncover the untold stories of Rosie's past in 1950s Wichita, they embark on a journey of forgiveness and second chances that will change their lives--and Rosie's--forever. Along the way they'll learn that God wastes nothing, his timing is perfect, and nothing is beyond his grace and redemption.
The Songs That Could Have Been is full of the same deftly handled, resonant writing that readers and critics alike enjoyed in Amanda Wen's first book in the series. Fans of Lisa Wingate and Rachel Hauck will add Amanda Wen to their must-read shelves.
Link to purchase the book
MY THOUGHTS:
Lauren Anderson's grandmother Rosie has advanced Alzheimer's. With trembling and tears she begins to ask about someone named Ephraim. Lauren and her brother have no idea who this Ephraim is, so Lauren digs and digs into the past while looking for answers.
The story shifts back to 1950s Arkansas when high schooler Rosie met another student - one of the few Black students in her high school. Despite the difficult race relations that went on at that time, Rosie and Ephraim were drawn to one another, yet doomed to a future that could never be.
In present day, Carter Douglas, a meteorologist, runs into someone from his past, and that is Lauren. Someone from over a dozen years ago. Someone he loved dearly. Lauren is in shock when she sees Carter. The two shared a very strong bond thirteen years previously, but they both ended up with broken hearts. Thirteen years now seemed like the blink of an eye for Carter and Lauren once they locked eyes. Sparks fly right and left and feelings long ago lost have quickly resurfaced.
While it seems they just might go their separate ways, a new cooking segment at the station Carter works for brings Lauren to the set. The segment is bringing in the views and is immensely popular, especially due to those undeniable sparks between Lauren and Carter. However, Lauren was really hurt when they ended things all those years ago and she is not sure she is ready to trust her heart again. The baggage just might be too heavy for either of them.
Back in 1954, Rosie doesn't understand why the races did not get along. It is clear she and Ephraim get along, but the separation between races was just so very wide, making their love, their bond, something that was doomed right from the very start.
This sensitive book deals with some serious issues, which include eating disorders, alcoholism, racism and segregation. But it also includes love and the power of forgiveness, as well as second chances for the young and old.
Many thanks to Kregel Publications for this ARC for review. This is my honest opinion.
Please enjoy my YouTube video review -

Amanda Wen is an award-winning writer of inspirational romance and split-time women’s fiction. She has placed first in multiple writing contests, including the 2017 Indiana Golden Opportunity, the 2017 Phoenix Rattler, and the 2016 ACFW First Impressions contests. She was also a 2018 ACFW Genesis Contest finalist.
Wen is a member of American Christian Fiction Writers (ACFW) and regularly contributes author interviews for their Fiction Finder feature. She also frequently interviews authors for her blog and is a contributor to the God Is Love blog. She is the author of Roots of Wood and Stone and The Songs That Could Have Been.
In addition to her writing, Wen is an accomplished professional cellist and pianist who frequently performs with orchestras, chamber groups, and her church’s worship team. She serves as a choral accompanist as well. A lifelong denizen of the flatlands, Wen lives in Kansas with her patient, loving, and hilarious husband, their three adorable Wenlets, and a snuggly Siamese cat.
To find Amanda Wen’s blog and short stories, visit www.amandawen.com. Readers can also follower her on Facebook (@AuthorAmandaWen), Twitter (@AuthorAmandaWen), and Instagram (@authoramandawen).