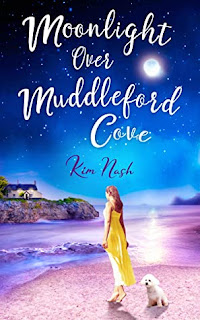 Title:   Moonlight Over Muddleford Cove
Author:  Kim Nash
Genre:   Romance
Format:  Kindle ARC
No. of Pages:   336
Date of Publication:   March 30, 2021
My Rating:   4 Stars
DESCRIPTION:
When thirty-four-year-old Nellie Wagstaff loses her job and discovers her fiancé is a cheating scumbag in a single day, she feels like the world has come crashing down. And that’s before the solicitor’s letter, along with a request to visit a place she hasn’t thought about for a very long time.

Heartbroken, Nellie escapes to the beautiful seaside town of Muddleford in Dorset, where she discovers she’s inherited more than she ever bargained for. Nellie never knew why her mother stopped talking to her sister, but now childhood memories of Muddleford come flooding back: long hot summers, the sea glistening beyond the sandy cove... and a stolen kiss with a boy called Jack.

Jack, now a devilishly handsome vet, has the local pet owners swooning over him, and as Nellie and he become close once more, and she gets used to gossiping with the locals and sipping wine at her beach hut with sand between her toes, she’s sure she can feel sparks flying once more. But just as she thinks she might be able to open her heart again, her newest frenemy, the glamourous Natalia, tells her a secret about Jack that changes everything.

Nellie will never know why her mother and aunt parted ways. She’ll sell the house, forget about Jack, and get back to real life. Because there’s nothing for her in Muddleford... is there?
An utterly uplifting and completely hilarious summer read about learning to trust yourself and of finding love and friendship in the least expected places for fans of Jessica Redland, Heidi Swain and Holly Martin.
Link to purchase the book
MY THOUGHTS:
Nellie Wagstaff has been dealt with some serious blows at the same time, including a breakup with her fiancé while dealing with stressful wedding plans. Then she loses her job. Not sure what she will do with her life imagine her surprise when she discovers that her aunt has died and that she has been left a sizable inheritance. Finding out the extent of what her aunt left her has left her all but speechless, but Nellie is plagued with sadness due to the fact that she was estranged from her aunt.
When Nellie discovers that the local vet in the town where her aunt lived is none other than her crush when she was a girl, her heart skips a beat. Nellie's mother and aunt had a falling out when she was fourteen so she hasn't seen Jack in years. There is something about Jack that Nellie can't shake. Sparks fly right from the start. Things are definitely looking up for Nellie.
Not only did Nellie inherit her aunt's house and a considerable sum, she inherits something else that is truly special. However, there are definitely some bumps in the road and Nellie finds herself forced to make some difficult and heartbreaking decisions.
What a wonderful book by Kim Nash! I loved Nellie and Jack. I also really loved the gorgeous town of Muddleford Cove. Between a combination of wonderful writing, endearing characters, the requisite unlikable character, a beautiful setting and a warm, satisfying ending, Moonlight Over Muddleford Cove proved to be a delightful read.
ABOUT THE AUTHOR: 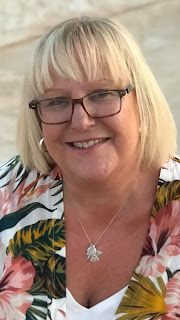 Kim Nash is an author of uplifting, funny, heartwarming, feel-good, romantic fiction.
She lives in Staffordshire with son Ollie and English Setter Roni, is Head of Publicity for Bookouture and is a book blogger at www.kimthebookworm.co.uk
.
Kim won the Romantic Novelists Association's Media Star of the Year in 2016, which she still can't quite believe. She is now quite delighted to be a member of the RNA.
When she's not working or writing, Kim can be found walking her dog, reading, standing on the sidelines of a football pitch cheering on Ollie and binge watching box sets on the TV. She's also quite partial to a spa day and a gin and tonic (not at the same time!) Kim also runs a book club in Cannock, Staffs.
Sign up to be the first to hear about new releases. Your e-mail will not be shared with anyone else and you will only contacted about Kim's books.
Amazing Grace was her debut novel with Hera Books and came out in April 2019. Escape to Giddywell Grange is Kim's second novel and was published in September 2019. Sunshine and Second Chances is Kim's third novel and will be published on June 4th 2020.
You can read Kim's Blog here: www.kimthebookworm.co.uk
web | facebook | twitter | instagram