Review - Love is What You Bake of It 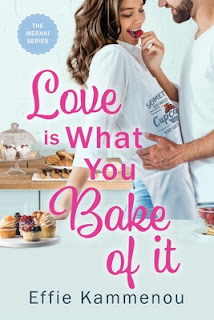 Title:   Love is What You Bake of It
Author:  Effie Kammenou
Series:  Meraki #1
Genre:   Romance
Format:  Kindle ARC
No. of Pages:   280
Date of Publication:   March 24, 2020
My Rating:   4 Stars
DESCRIPTION:
The only love Kally Andarakis is baking is in the form of the sweet treats she whips up in her café, The Coffee Klatch.
Kally never believed herself to be a person worthy of love, but when an intoxicating man she considered out of her league pursues her, she risks everything to be with him. Later, when tragedy strikes, truths are revealed that leave Kally brokenhearted and untrusting.
Eight years later, Kally is a successful pastry chef running the café she’d always dreamed of owning. With a home of her own, a profession she’s passionate about, and the support and love of friends and family, Kally is content with the life she has carved out for herself.
Until the day Max Vardaxis walks into her café…
With arguing parents, meddling relatives, an overly energetic grandmother, a man-crazy best friend, and the long ago, mysterious disappearance of a grandfather, this new man in town is just one more complication in Kally’s life, if not the main one.
Kally must now decide whether to keep her heart safe or to once again take a ‘whisk on love.’
Link to purchase the book
MY THOUGHTS:
One thing that Kally Andarakis cannot abide is a cheating man. Having previously fallen in love and losing someone special - then finding out a truth about him after the fact - has kept her guarding her heart. However, when a handsome cop named Max Vardaxis enters her café her senses are immediately assaulted. Kally has actually found fulfillment in life. She has done so by creating wonderful baked items. In fact, this book contains several delectable recipes. This is what makes Kally happy. Starting a new romance after her bad experience is not the direction Kelly chooses to go.
Kally comes from a strong family, albeit more than a bit nosy, parents who constantly bicker, a friend who is determined for Kally to find a man. Despite that bit of chaos in her life, Kally is more than happy. Besides wondering whether or not anything could possibly happen with Max, there is a bit of mystery in Kally's life, and that is the fact that her grandfather has been missing for decades.
Meanwhile, it becomes more than clear that both Max and Kally are drawn to one another, yet existing baggage that they both have bears serious consideration. How far either of then will go to reach for love is a chance they both are not certain they can take.

In this sweet story where both characters come from a Greek background brings both drama and joy, with a light touch that was a delight to read. This entertaining story was a great start to an already enjoyable series. The second book in this series is Love by Design, which I have already read and enjoyed as much as I have this book.
Many thanks to Effie Kammenou for this ARC for review. This is my honest opinion.

Effie Kammenou is a believer that it is never too late to chase your dreams, follow your heart, or change your career. She is proof of that. At one time, long ago, she’d hoped that by her age, she would have had an Oscar in her hand after a successful career as an actor. Instead, she worked in the optical field for 40 years while raising her two daughters.
In 2015, three years after the death of her mother from pancreatic cancer, she published her debut novel, Evanthia’s Gift, book one in a women’s fiction, multigenerational love story and family saga, inspired by her mother and her Greek heritage. Kammenou continues to pick her father’s brain for stories of his family’s life in Lesvos, Greece, and their journey to America. Her interview with him was published in the nationally circulated magazine Reminisce.
Evanthia’s Gift: Book One in The Gift Saga was a 2016 finalist in the Readers Favorite Book Awards.  Waiting for Aegina: Book Two in The Gift Saga was awarded finalist status in the 2019 International Book Awards and Chasing Petalouthes, the last book in the trilogy, had also placed in the Readers Favorite Book Awards for the 2018 contest.
Her latest novel, the first book in a new contemporary romance series, is now complete. Love is What You Bake of It, follows Kally’s path to independence despite her sometimes stifling family and her tumultuous road to finding love. But it wouldn’t be a Kammenou novel without a delve into the past, or the references to mouth-watering foods.
Effie Kammenou is a first-generation Greek-American who lives on Long Island with her husband and two daughters. When she’s not writing or posting recipes on her food blog, aptly named cheffieskitchen, you can find her entertaining family and friends or traveling for ‘research.’
As an avid cook and baker, a skill she learned from watching her Athenian mother, she incorporated traditional Greek family recipes throughout the books for a little extra ‘flavor.’
She holds a Bachelor’s Degree in Theater Arts from Hofstra University.
web | twitter | facebook | instagram