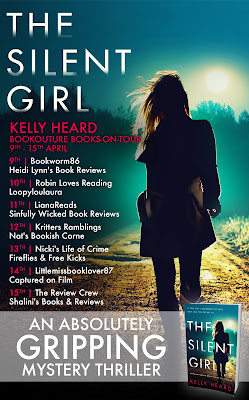 Sophie wakes in a cold hospital bed with no memory of her life before. She isn’t even sure if Sophie is her real name…

The police tell Sophie she was found alone, unconscious and surrounded by blood-red flower petals, on a remote stretch of highway. She had no I.D., no phone, and no one had reported her missing. But while Sophie’s identity is a mystery, one thing is clear: someone tried to kill her and they almost succeeded.

While she’s recovering, Sophie can’t shake the feeling someone is watching her. When a bouquet of red roses is sent to her room without a note, she is convinced they’re from the same people who left her for dead with crimson flowers woven through her hair…

With no one to turn to, Sophie takes a job working high in the mountains, miles from the nearest town, where she feels she might finally be safe. Until more red flowers begin appearing on the front step of her secluded cottage.

Every cell in Sophie’s body is telling her to run. But she is also desperate to know the truth about who she is. If she lets these people catch up with her, she could finally uncover her past… Or once again place her life in terrible danger…

A totally gripping psychological suspense novel that you won’t be able to put down and will keep you turning the pages late into the night. Perfect for fans of The Girl on the Train, The Woman in the Window and The Silent Patient. 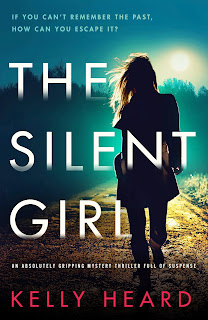 Title:   The Silent Girl
Author:  Kelly Heard
Publisher:  Bookouture
Genre:   Psychological Thriller
Format:  Kindle ARC
No. of Pages:   341
Date of Publication:   April 9, 2021
My Rating:   4 Stars
Not only does a woman who decides to call herself Sophie wake up in a hospital bed to discover that she has endured serious physical injuries, including being stabbed, it becomes apparent that she has no memory. No idea who she is and why she learns that she was left for dead. The only snippet of memory that Sophie has is the first name of her brother. Quite naturally, Sophie desperately wants to find him and also wants to find any clues to her identity and past.
After some time in the hospital, growing no closer to her identity, Sophie takes a job working at a mansion, one with a dark past. Now working for a man named Nathaniel, Sophie reaches for a feeling of safety, as the has an unexplained sense of foreboding. As time passes, Sophie's living at the isolated mansion she is working to restore comes with a sense of eeriness. In fact, this novel begins to thread together the mystery behind Sophie's past, but also regarding the past of the mansion, thus lending a gothic feel to this story. As Sophie begins to draw close to Nathaniel and to his young son, she has no idea how close she is to danger, especially should her memory be restored.
The character development in this book was spot on. Readers get a good feel of Sophie's nature, despite whatever connections she has in life that led to her circumstances. Nathaniel's character was excellent as well, as his goodness shined through despite his difficult past. I also enjoyed Nathaniel's son Lincoln. He was the bright light in this story.
The Silent Girl is an engaging and thrilling read, filled with dark suspense and even a bit of spookiness. What is more is that the twists and turns in this book really caught me by surprise. While reading this book, there was no doubt that Sophie would eventually regain her memory, especially due to the fact that she was nearly murdered. The road to these discoveries proved to be shocking, thus leading to a tension filled ending that had me on he edge of my seat.
Many thanks to Bookouture and to NetGalley for this ARC for review. This is my honest opinion.
ABOUT THE AUTHOR:

Kelly Heard is a novelist from Afton, Virginia. She published poetry in literary magazines before signing her debut novel, Before You Go, with Bookouture.
Kelly prefers writing to most other pastimes, but you'll occasionally find her in the garden, hiking, or exploring antique shops.
Author Social Media Links:
Twitter: https://twitter.com/KHeardBooks
Website: www.kellyheardbooks.com