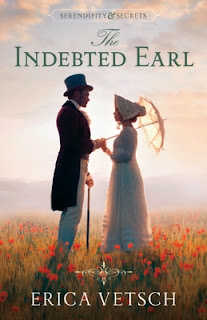 Title:   The Indebted Earl
Author:  Erica Vetsch
Series:  Serendipity and Secrets #3
Publisher:  Kregel Publications
Genre:   Christian Historical Romance
Format:  Kindle ARC
No. of Pages:   281
Date of Publication:  March 23, 2021
My Rating:  4 Stars
DESCRIPTION:
Can Captain Wyvern keep his new marriage of convenience all business--or will it turn into something more?
Captain Charles Wyvern owes a great debt to the man who saved his life--especially since Major Richardson lost his own life in the process. The best way to honor that hero's dying wish is for Wyvern to escort the man's grieving fiance and mother safely to a new cottage home by the sea. But along the way, he learns of another obligation that has fallen on his shoulders: his uncle has died and the captain is now the Earl of Rothwell.
When he and the ladies arrive at his new manor house in Devon, they discover an estate in need of a leader and a gaggle of girls, all wards of the former earl. War the new earl knows; young ladies and properties he does not. Still wishing to provide for the bereaved Lady Sophia Haverly, Charles proposes a marriage of convenience.
Sophie is surprised to find she isn't opposed to the idea. It will help her care for her betrothed's elderly mother, and she's already fallen in love with the wayward girls on the Rothwell estate. This alliance is a chance to repay the captain who has done so much for her care, as well as divert her attention from her grief. When Wyvern returns to his sea commission, she'll stay behind to oversee his property and wards.
It sounds so simple. Until the stalwart captain is arrested on suspicion of smuggling, and Sophie realizes how much he's come to mean to her. Now she'll have to learn to fight, not only for his freedom but also for his love.
Link to purchase the book 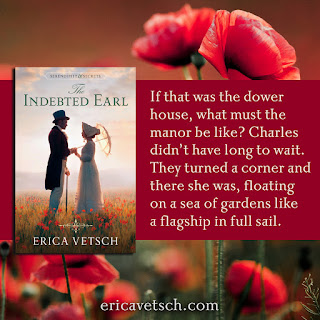 MY THOUGHTS:
Captain Charles Wyvern wants to prove true to his word. When a soldier under his command makes one last wish before he dies, Wyvern is determined to do his best to fulfill that wish. As the soldier, Major Richardson, saved his life, this debt carries a lot of weight. Richardson's request to Wyvern was for him to see about his fiancée, Sophie.
Meanwhile, now that the war is over, Wyvern is worried about his next travels as living on sea is the only life he has ever loved. However, when his uncle passes away, Wyvern becomes the Earl of Rothwell. His new title brings on quite a few duties, along with Sophie's immediate needs. What is more is that three girls show up on his doorstep and they are also in need of care. Sophie is devoted to the woman who would have been her mother-in-law. Losing Richardson does not in any way remove the love and care Sophie has for her.
What an interesting group of people - a man with a title who would rather be at sea, a woman grieving her fiancé, an elderly woman who has own own needs, and three young girls. How will they all get on, when all Wyvern wants is another commission?
I loved this Regency romance, with strong, affective characters, filled with adventure, a bit of mystery, all while never forgetting how faith is a strong guiding force. I loved the emotional edge this story had, and this played out on several levels. The connection that Wyvern and Sophie had was palpable as it was developed. Their growing love and attention towards the girls warmed my heart, as well as Sophie's relentless and gentle concern for her fiancé's mother. Lastly, I especially loved the conflict Wyvern experienced when all he wanted was to get back to his life on sea, as well as the twist where his very future seemed quite uncertain.
The Indebted Earl is the pleasing last book in the Serendipity and Secrets trilogy, and the first two books are The Gentleman Spy and The Lost Lieutenant. I loved all three of these books, especially the continuity that came with familiar characters from the first two books in the series.
Many thanks to Erica Vetsch, Kregel Publications, NetGalley and Audra Jennings, PR, for this ARC for review. This is my honest opinion.
Click here to read an excerpt.

Erica Vetsch is a New York Times best-selling and ACFW Carol Award–winning author. She is a transplanted Kansan now living in Minnesota with her husband, who she claims is both her total opposite and soul mate.
Vetsch loves Jesus, history, romance, and sports. When she’s not writing fiction, she’s planning her next trip to a history museum and cheering on her Kansas Jayhawks and New Zealand All Blacks.
A self-described history geek, she has been planning her first research trip to England.
Learn more about Erica Vetsch and her books at www.ericavetsch.com. She can also be found on Facebook (@EricaVetschAuthor), Instagram (@EricaVetsch) and Pinterest (Erica Vetsch).