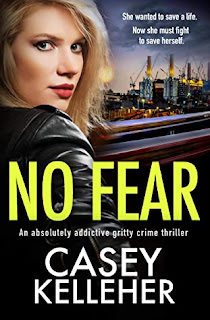 Title:   No Fear
Author:  Casey Kelleher
Publisher:  Bookouture
Series:  DC Lucy Murphy
Genre:   Mystery & Thrillers
Format:  Kindle ARC
No. of Pages:    289
Date of Publication:   October 6, 2020
My Rating:   4 Stars
DESCRIPTION:
She wanted to save a life. Now she must fight to save herself.

When DC Lucy Murphy meets Debra, wife of feared drug dealer Gerard Jennings, she sees a young woman in urgent need of help. Brutalised by her husband, Debra is too terrified to tell the police what she knows. But Lucy is determined to bring Gerard down – for Debra’s sake, and the safety of the Griffin Estate.

Meanwhile, after the death of one of his drug runners, Gerard is under pressure from his bosses to prove he’s still up to the job. Facing threats of violence as well as police interest, Gerard is getting desperate – and desperate men are the most dangerous of all.

As Lucy prepares to go undercover in Gerard’s gang to get the evidence she needs to arrest him, her beloved grandmother Winnie starts acting strangely. She mentions a man visiting her at night in her care home, but that makes no sense – does it?

Any distraction could prove deadly for Lucy and the people she’s trying to protect. But she has backed a vicious man into a corner, and he’ll stop at nothing to get what he wants.

A gritty, shocking, action-packed thriller that will have you on the edge of your seat until the very last page. Fans of Martina Cole, Kimberley Chambers and Jessie Keane will love this.
Link to purchase the book
MY THOUGHTS:
DC Lucy Murphy may be young in her career, but she is not without experience and wisdom. When she meets the broken and abused wife of a drug dealer, Lucy wants to help, but does not see the danger ahead.
When Debra Jennings said I do to husband Gerard, she had no idea what was ahead for her. Not only does she realize a little too late that he is a drug dealer, he is a domestic batterer and she spends far too many times receiving emergency treatment for injuries sustained by him. When the police, specifically Lucy Murphy, tries to step in, Debra fears for her life. If Debra is going to deal with Gerard, it will be on her own terms.
Not only is Gerard out of control at home, placing his wife and his sons in danger, things on the "business" end of things are not going well, leaving him something to prove. Little does Gerard know that the police have set a plan in motion - one that will protect his family - and hopefully get the dangerous criminal that he is off of the street.
For Lucy, not only is she concerned about Debra, but she is striving to care for her grandmother Winnie, who plays a role in this book during her battle with dementia. Hopefully, Lucy won't find herself too distracted with her grandmother to be helpful to Debra, especially as she takes on a very specific role in order to help her.
No Fear is the second book in the DC Lucy Murphy series and it is no easy read. Gerard is one of the most unlikeable protagonists I have read in a long while. Conversely, Lucy and Debra are strong women who prove to be up to the fight to bring about some important changes. Whether this book lends itself to domestic drama, crime or danger, as well as a combination of all three, it proved to be a nail-biting thriller that captured my attention from beginning to end.
Many thanks to Bookouture and to NetGalley for this ARC for review. This is my honest opinion.

Born in Cuckfield, West Sussex, Casey Kelleher grew up as an avid reader and a huge fan of author Martina Cole.
Whilst working as a beauty therapist and bringing up her three children together with her husband, Casey penned her debut novel Rotten to the Core. Its success meant that she could give up her day job and concentrate on writing full time.
For all news and updates:
www.caseykelleher.co.uk
www.facebook.com/officialcaseykelleher
http://caseykelleher.wordpress.com
Twitter: @caseykelleher