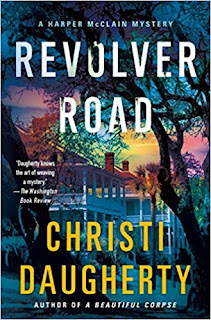 DESCRIPTION:
Crime reporter Harper McClain is back on the beat when a troubled musician vanishes in Christi Daugherty’s Revolver Road.

Even in the chill of February, no place touches Harper McClain’s heart like Savannah. She should be walking beneath the historic city’s towering oaks, surrounded by graceful mansions. Instead, she’s hiding miles away on Tybee Island after a mysterious voice on the phone warned her that someone wanted her dead. The call was too specific to ignore. The caller knew everything about her. But that was months ago, and she’s getting tired of being scared.

Her only escape is her work at the newspaper, where the hottest story in town is the disappearance of Xavier Rayne. The singer had a hit album on his hands, and was about to go on tour, but then he walked out of his beachfront home and vanished. The police believe he drowned, but Harper suspects his disappearance may be more ominous than that. Something doesn’t feel right about it.

His bandmates and actress girlfriend say he’s run away before. They expect him to come home. Until a body washes up with two bullet holes in it. Now everyone in Rayne’s life is a suspect. As Harper digs deeper into the case, though, the threats against her own life return. The phone call she received was very real. A killer from her past is coming for her.

Now she must solve two murders, or end up dying on Revolver Road…

Her mother's murderer is going to kill her. Yes, Harper McClain is in fear of her life. A very successful reporter, yet hiding from a killer. Instead of living and working in beautiful Savannah, Harper is ensconced in a small beach house on Tybee Island. She can barely get a cell phone signal. However, she must stay hidden until the police can find the person behind the phone call that has terrified Harper.

As it is, Harper has never, ever forgot her mother's murder. It happened when she was quite young, but she saw the killer. It is decades later and now the killer has made his mark. With police protection Harper is at least able to work at the paper. When someone right there in that small town has suddenly disappeared, Xavier Rayne, Harper seeks to get to the bottom of things. The newspaper she works for is floundering, and Xavier is a huge singer, so if Harper solves this - and gets front page coverage - the paper might have a chance at surviving.

It is clear that Xavier drowned, as facts prove, but Harper senses there is much more behind that so she interviews those closest to Xavier. Meanwhile, the threats against her continue. Can she find Xavier's killer and not become a victim herself from her initial threat?

Revolver Road is the third book in the Harper McClain series. I found it to be a compelling read and both Harper's past and present, and dealing with the murder case, kept my interest, especially as the twists and turns flew by at a rapid pace. I look forward to whatever else Christi Daugherty has in store, and really hope Harper will be back for at least one more story. Although this book will do quite well as a standalone, the first two books in the series are The Echo Killing and A Beautiful Corpse. They were also excellent reads.


Many thanks to Minotaur Books and to Edelweiss for this ARC for review in exchange for my honest opinion.