BLOG TOUR - The Man I Loved Before 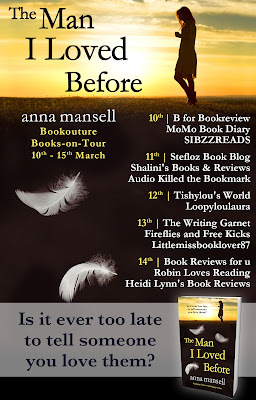 Today is my stop on the Blog Tour for The Man I Loved Before by Anna Mansell.

‘Dear Ben, I can only write you this letter because I know you’ll never read it…’

When Jem writes to her ex Ben, it’s to explain everything. All the secrets she kept from him – from the little lies she’d sometimes tell about how new those shoes really were, or how many glasses of wine she’d had that evening… right up to The Big Thing that happened on the night that changed everything. But she never expects he will actually see what she’s written.

She is just writing because she thinks it will help to get the words out. Later, she resolves, she’ll burn the letter, and then the past will be in the past for good.

Because Jem is doing fine now. She’s busy: working, spending time with her best friend, and looking after her mother, who’s in remission from cancer. She’s even dating again and has just met a guy who she thinks she could actually fall for. At long last, Jem is really, definitely somewhere close to happy.

But her mum finds the letter and thinks she’s doing Jem a favour when she posts it to Ben. And Jem’s new, carefully rebuilt life begins to unravel in ways she could never have imagined. Then, when her mother gets ill again, she finds herself asking who has the key to her future. The man she’s falling in love with now? Or the man she loved before?

A heartbreaking, beautifully honest novel that will stay with readers long after they finish it. Perfect for fans of Diane Chamberlain, Amanda Prowse, and Susan Lewis. 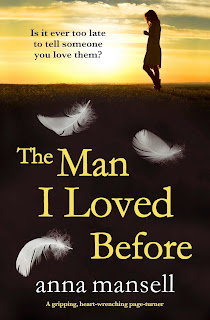 Most people in life look for closure and that is exactly what Jem needed. Everything was going against her, but one of the most difficult things she dealt with was a previous breakup. So Jem writes a letter to Ben, and discussed things of the past, including serious issues she kept from him.

As this emotional read by Anna Mansell begins, Jem's letter to Ben begins, and the reader meets her at 38 years of age, single for about a year. However, her life seems to have come to a full stop. Will she be able to move on, with everything happening, including the fact that her mother now has cancer?

I was drawn into Jem's story from the very beginning, more so with her heart being on the line. She doesn't always land on her feet, sometimes exercising questionable judgment, but what she was is a woman completely relatable and that is what I think I enjoyed most about this story. Having her close friend Leanne by her side throughout the changes in her life was a nice element to this book. Having lost my mother to cancer I was really drawn into Jem's relationship with her mother during this difficult time.

While this is my first book by Ms. Mansell I will say she has definitely caught my interest in the story as well as her engaging writing. I look forward to reading her next book. 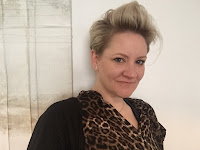 Anna had a brush with 'fame' as a magician's assistant back in 1977. She later decided that being sawn in half by her magical performing father, at barely 6 months old, was too submissive a role. She vowed to channel the trauma into something much more pro-actively creative. Having failed at acting, singing and professional murder mystery parties (she was ALWAYs the one to die!), she fell to something much more solitary: writing. Anna lives on a dairy farm in Cornwall with her two children, her husband, and her ex-racing greyhound, Olive Dog.