BOOK BLAST - Her Side of History 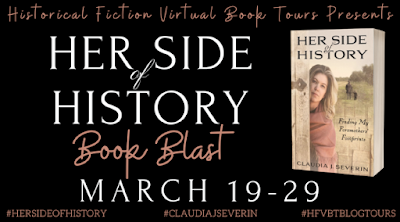 HER SIDE OF HISTORY
by CLAUDIA SEVERIN 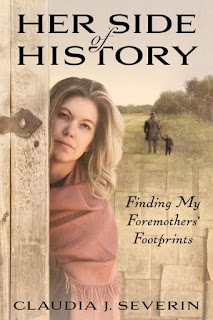 Author Claudia J. Severin took things into her own hands when her genealogy research seemed limiting.

Follow her foremothers, four mothers plucked from her family tree. She reimagines the lives of ancestral families in this anthology. Ina, the tragic suffragette, traded her college degree and teaching career for a loving husband and children in the 1910s, in the shadow of the Great War, but things did not work out as she planned.

Mary, a German immigrant, finds love with an Iowa farmer, and crosses the state in a covered wagon with his entire family to become a homesteader on the Nebraska plains in 1869. She didn’t know that Indian encounters, prairie fires and locusts would threaten her and her rapidly growing family. Nellie fell for the bad boy, the Good Time Charley who didn’t let a little thing like Prohibition stand in his way. She tries to control his drinking and spending, while supporting her family in times of calamity in the 1920s and 1930s traveling from Nebraska to Kansas and back again. Katie finds herself the sole heir to her father’s farm in southeastern Nebraska decades after the Homestead Act took most of the land ownership out of play. She enjoys playing the flirtatious games learned from her older half-sisters. But are her suitors interested in her or her inheritance?

Monday, March 23
Passages to the Past

Claudia Johnson Severin lives with her farmer husband on a southeastern Nebraska farm that was homesteaded in 1869 by her husband’s great-grandparents, a setting for a portion of her anthology. At one time, the farm was home to dairy cows and chickens, as well as children. The cows, chickens, and children have all moved on, along with her day job. She spent a year researching many branches of her family tree but decided the facts she uncovered did not leave enough to the imagination. She applied imagination to the facts and came up with this book.

When she is not writing, she is constructing one-of-a-kind play structures for her grandchildren. She is a graduate of the University of Nebraska College of Journalism and a Cornhusker football fan.