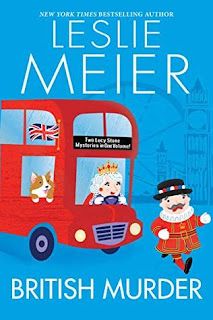 Lucy Stone’s hometown of Tinker’s Cove, Maine, is where her heart is. But traveling to merry old England brings delightful adventure—along with a helping or two or murder—in these beloved mysteries . . .

A trip to England, sponsored by Winchester College, sounds practically perfect to Lucy Stone—until the tour leader suffers a fatal asthma attack mid-flight. Lucy suspects some very unnatural causes, but luckily, she packed her sleuthing skills. Between stops for afternoon tea, visits to historic sites, and catching up with an old flame, she’s ensnared in a daring scheme. But will it lead her to a criminal mastermind—or ensure that she’s the next victim?

Lucy can’t wait to join her friend Sue for a gala hat show at the English country house owned by the Earl of Wickham. But at Moreton Manor, there are secrets—and some unpleasant relatives—lurking among the elaborate chapeaus. When a bludgeoned body is found in a hidden room, Lucy must sift through friends and family foes to find the low-down killer stalking the upper crust, before more blue blood runs red . . . 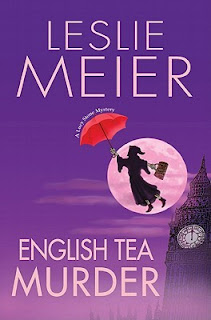 If Lucy Stone wasn't nervous at being at least seven miles high in the air while flying to London, on a sponsored trip by Winchester college, when a fellow passenger suddenly drops dead, she certainly is now.

The man that died was tour leader, George Temple. The cause of death was apparently an asthma attack, but, as always, Lucy seeks to see if there was anything else at play here. So, par her natural course, Lucy acts as amateur sleuth yet again.

When in London, Lucy runs into someone from her past - and a man that has sparked her interest - Quentin Rea. Lucy has no business being drawn to Quentin as she is married to Bill, and is the mother of four, and is also now a grandmother.

Not only must Lucy ignore Quentn's overtly flirty behavior, she begins to notice other odd activity among other members of the group that are part of the tour. Strangely enough, just about everyone on the tour has some type of connection to the victim. When it is discovered that there was a real motive for revenge, then Lucy gets even closer to the cause. After another tour member dies, Lucy realizes that she just have to dig deeper and that she might have an idea as to what has happened. Can she prove her ideas, or will this place her in grave danger?

English Tea Murder was a quick read. I wasn't too keen on Lucy being tempted by Quentin, but I guess as it it can be human nature, it was understandable. However, there was enough intrigue to keep the story rolling at a great pace. I look forward to continuing the series. The next book is Chocolate Covered Murder.

Many thanks to Kensington Books and to NetGalley for this ARC for review. This is my honest opinion. 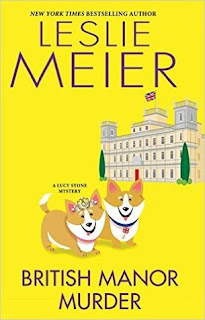 Every now and again, Lucy Stone manages to get trips out of the country. That is the case in the next book in Leslie Meier's series. She will be joining best friend Sue and is heading to England. This is not her first time in the UK, but this time her objective is different. She is to attend a hat exhibition at an exclusive manor. Unfortunately for Lucy, wherever she is, there is always a body found. That is indeed the case at this time.

Our intrepid amateur sleuth cannot simply plow and and solve this as she has done countless times before. She is in rather an exclusive manor and they are honoring traditions from times of the past. So Lucy really has to be on her Ps and Qs this time around.

British Manor Murder was a light read, and not one of my favorites in the series. I am always glad to read these books, however, because as a whole, this is a great series.  Having read all the books in order has made Lucy, husband Bill and their four children (now adults) very dear to me. I think I like Lucy better in her town of Tinker's Grove, Maine. When she heads out of the country and tries to solve murders, I rather lose interest.

Many thanks to Kensington Books and to NetGalley for this ARC for review. This is my honest opinion.