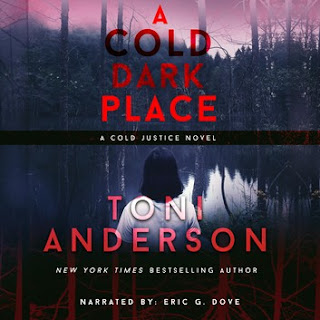 She’s an FBI agent hunting her sister’s killer.
He’s an assassin who’ll die to keep her safe.
His secret will destroy them both.

Former CIA assassin Alex Parker works for a clandestine government organization hell-bent on taking out serial killers and pedophiles before they enter the justice system. Alex doesn't enjoy killing, but he's damn good at it.

When Mallory starts asking questions, Alex is ordered to watch her. As soon as they meet, the two begin to fall in love. But the lies and betrayals that define Alex's life threaten to destroy them both—especially when the man who stole her sister all those years ago makes Mallory his next target. 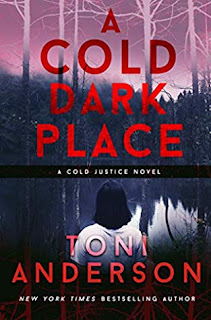 Before being invited to listen to this audiobook I had not heard of Toni Anderson. I am thrilled that I was able to do so and the only problem I can foresee is now there is yet another series that I absolutely must follow. This book is narrated by Eric G. Dove. There are nine books in the Cold Justice series, and two in the Cold Justice: Crossfire series. He is an excellent narrator and actually narrates all of the books in the series.

FBI Special Agent Mallory Rooney is about to start down a new path with Alex Parker, former CIA assassin now working with an off the books organization with the sole intent of handling serial killers by exercising their own brand of justice. While Alex knows everything about Mallory, including the fact that she wants closure for the disappearance of her twin sister when they were children. However, Mallory believes Alex is a security expert.

Mallory's bosses want to find the vigilantes and thus Mallory is promoted to the BAU, a job that should have taken years and a lot of training to get. She is secretly assigned to find out who is leaking the location of the killers they are seeking just before the FBI can swoop down on them. No one can know what Mallory is about. Meanwhile, Alex is also assigned to go on the watch - and his target is now Mallory so that she cannot discover the truth.

Alex must keep his organization a step ahead of the FBI, and the fact that he and Mallory are more than drawn to one another only complicates things. How can they each do their jobs and manage to deal with the incredible sparks that are between them?

What a fabulous book! I absolutely love audiobooks and am able to listen to a handful of them each month. Listening to this exciting book was made even better when I found out that A Cold Dark Place is the first book in a series. I love Alex and Mallory and I truly eager to see if there was any way for anything to develop between them with the fact that they were seemingly on the opposite ends of justice. This ultra spicy read was full of suspense and action and had a riveting conclusion. I am definitely eager for more.

Many thanks to Toni Anderson, InkSlinger PR and Kobo for this audiobook for review. This is my honest opinion.

Toni Anderson is a New York Times and USA Today bestselling author, RITA® finalist, science nerd, professional tourist, dog lover, gardener, mom. Originally from a small town in England, Toni studied Marine Biology at University of Liverpool (B.Sc.) and University of St. Andrews (Ph.D.) with the intention she’d never be far from the ocean. Well, that plan backfired and she ended up in the Canadian prairies with her biology professor husband, two kids, a rescue dog, and a laid-back leopard gecko.

Toni started writing while pregnant with her first child and never stopped. Her greatest achievements are mastering the Tokyo subway, climbing Ben Lomond, snorkeling the Great Barrier Reef, and surviving fourteen Winnipeg winters (fingers crossed). She loves to travel for research purposes and was lucky enough to visit the Strategic Information and Operations Center inside FBI Headquarters in Washington, D.C. in 2016, and she also got to shove another car off the road during pursuit training at the Writer’s Police Academy in Wisconsin. Watch out world!