SERIES REVIEW - The Tattooist of Auschwitz and Cilka's Journey 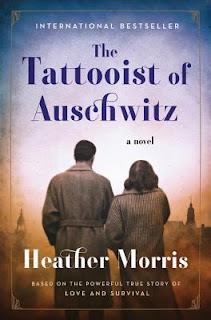 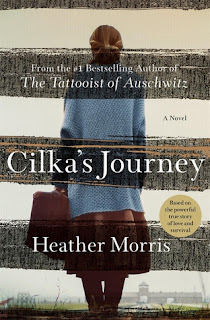 In this combined post, I will be reviewing the two books in The Tattooist of Auschwitzt series by Heather Morris. This Historical Fiction series........

In April 1942, Lale Sokolov, a Slovakian Jew, is forcibly transported to the concentration camps at Auschwitz-Birkenau. When his captors discover that he speaks several languages, he is put to work as a Tätowierer (the German word for tattooist), tasked with permanently marking his fellow prisoners.

Imprisoned for more than two and a half years, Lale witnesses horrific atrocities and barbarism—but also incredible acts of bravery and compassion. Risking his own life, he uses his privileged position to exchange jewels and money from murdered Jews for food to keep his fellow prisoners alive.

One day in July 1942, Lale, prisoner 32407, comforts a trembling young woman waiting in line to have the number 34902 tattooed onto her arm. Her name is Gita, and in that first encounter, Lale vows to somehow survive the camp and marry her.

A vivid, harrowing, and ultimately hopeful re-creation of Lale Sokolov's experiences as the man who tattooed the arms of thousands of prisoners with what would become one of the most potent symbols of the Holocaust, The Tattooist of Auschwitz is also a testament to the endurance of love and humanity under the darkest possible conditions.

With his very life being at stake, as well as that of his family, and all choice completely taken away from him, all led to Lale Sokolov's capture, being transported and ultimately imprisoned in more than one concentration camp. It started for Lale in April 1942, and per the norm for those suffering in concentration camps, he was assigned a number, 32407.

Lale is rather unique, however. He excels at languages and is intelligent as well as selfless. He starts to attain status in the camps. He turns this privilege into a means of helping out other prisoners. When Lale meets another prisoner, Gita, while performing a job he despises - that of tattooing their prisoner numbers on their arms - she makes an impression on him. From that moment on, with her sheer fear and terror, she touches his heart and he is determined that they will survive the camp and eventually marry.

Anyone familiar with World War II and the stories of Auschwitz have a fairly good knowledge as to how things go from here. There is trauma, tragedy, death, sorrow and more. More than once, this story brought me to tears. However, this story also gives us hope. It is this very hope that makes this story so utterly remarkable.

Her beauty saved her life - and condemned her.

Cilka is just sixteen years old when she is taken to Auschwitz-Birkenau Concentration Camp, in 1942. The Commandant at Birkenau, Schwarzhuber, notices her long beautiful hair, and forces her separation from the other women prisoners. Cilka learns quickly that power, even unwillingly given, equals survival.

After liberation, Cilka is charged as a collaborator for sleeping with the enemy and sent to Siberia. But what choice did she have? And where did the lines of morality lie for Cilka, who was sent to Auschwitz when still a child?

In a Siberian prison camp, Cilka faces challenges both new and horribly familiar, including the unwanted attention of the guards. But when she makes an impression on a woman doctor, Cilka is taken under her wing. Cilka begins to tend to the ill in the camp, struggling to care for them under brutal conditions.

Cilka finds endless resources within herself as she daily confronts death and faces terror. And when she nurses a man called Ivan, Cilka finds that despite everything that has happened to her, there is room in her heart for love.

At the age of 16, Cilka is torn away from her family and is taken to an Auschwitz concentration camp. She is only saved by her beauty. Clearly noticed, she is forced to be different from the other women prisoners. Instead, she is at the beck and call of a commanding officer at the camp. Sadly, for Cilka, life has morphed into a battle for survival and she does what she can to stay alive. Furthermore, she helps the other prisoners out any chance she gets.

One day Cilka thinks she may be freed. Sadly, due to her rather forced relationship with the officer, she is banished to Siberia. Oh what further tragedy she undergoes. Reading of Cilka's experiences, which, by the way, were written based on extensive research done by the author, was heartbreaking. I not only had to put the book down a time or two, but I had to dry my own tears more than once.

Despite the horrors, Cilka proves her worth. Even at her young age, she gets an opportunity to care for the ill. Cilka was forced to grow up and quickly, not only due to her own experiences, but also  by what she witnessed on pretty much a daily basis while serving nursing duties.

This book kept me on tenterhooks. I kept thinking we would see Cilka's end. Instead, we are treated with one of the most satisfying conclusions to a story that I have read for quite a long time. Having read several World War II historical fiction stories, quite obviously I knew going in that there would be a high level of tragedy and sadness. But, as stated, the conclusion warmed my heart and Cilka will be with me for a very long time. 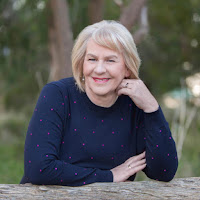 I was born in Te Awamutu, New Zealand, a small rural town in the middle of the North Island. I had an older brother, then three more boys followed. My childhood was spent in the even smaller village of Pirongia with four generations of my family living within proximity of each other. My primary school years were spent at the local school which at that time only had a handful of classrooms. For secondary schooling I went to Te Awamutu College.

An average student, according to my reports, except for commercial subjects, shorthand and typing, and sport. I was an athlete, a swimmer, played netball and tennis. And while I loved reading, devouring the Encyclopaedia Britannica where I could escape to far-away exotic lands, attempts to make me write my own stories, failed. I was told from a very young age, I could tell a good story, and growing up in a time when children where asked to be seen not heard, was enough.

In 1971 I moved to Melbourne, Australia, to escape what I considered the claustrophobic environment of having too many extended family members around me. Soon after arriving in Melbourne I met my husband to be Steve (don’t call me Stephen) Morris and we married in 1973.

In 1975 Steve and I returned to New Zealand, living in Christchurch, South Island, a reasonable distance from my hometown and family in the North Island.

Waking up one morning I realised I had missed out on something – the extended education I secretly craved that was not offered when I left school. I commenced a B.A. degree at Canterbury University (NZ) in 1986 before moving back to Melbourne in 1987. After a year settling our family into a much bigger city, I enrolled and completed my B.A. at Monash University in 1991. I majored in Political Science.

In 1995 I began work in the Social Work Department at Monash Medical Centre in Melbourne where I stayed until 2017.

During this period, I watched our three children grow into amazing adults. I was involved in their sport and at the age of forty-five became a competitive Veteran athlete, primarily taking part in the various ‘throwing’ competitions. Shot-put, discus, javelin and my favourite, hammer throwing. I never stopped telling stories, or as my husband called them – long-winded tales.

In 1996 I decided to follow my passion for storytelling and enrolled in The Professional Scriptwriting Course through the Australian College of Journalism.

I went on to attend many screenwriting courses, seminars and workshops in both Australia and the U.S. My workplace provided me with a wealth of heroic storylines, several of which I adapted into screenplays that now line the bottom drawer of my desk.


And then I met Lale Sokolov.