REVIEW - The Highlander Who Protected Me 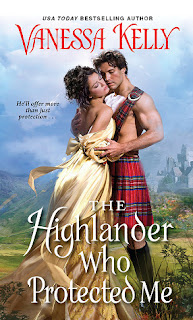 Bestselling author Vanessa Kelly returns with an enthralling new series about the men of the Kendrick clan—and the women who claim their hearts...

Lady Ainsley Matthews, heiress and darling of the ton, was expected to make a magnificent match. Instead she's hiding on a remote Scottish estate, terrified that her vicious former fiancé will use her pregnancy to force her into marriage. One man can help her—Royal Kendrick, son of a distinguished Highland clan. Though a mistake drove them apart long ago, Royal is the only person Ainsley trusts to protect her baby—even if that means agreeing to never see either of them again.

Scarred in body and soul by war, Royal suddenly has a purpose—caring for an innocent babe and thereby helping the woman he can't stop loving. But when Ainsley ultimately returns to Scotland, determined to be a real mother to her child in spite of the risk, there's only one solution: marriage. And only one likely outcome: surrendering to the desire that's simmered between them for so long, no matter how dangerous it may be.

Lady Ainsley Matthews didn't make the match that was expected of her. Instead, she is hiding at a Scottish Estate, desperately feeling that her former fiancé will use the fact that she is pregnant to forcer her to marry him. When she runs into Royal Kendrick, she quickly discovers that she can trust him. And that she does.

She asks the impossible of Royal. And he accepts. She asks him to take her baby, adopt the child. This breaks Ainsley's hearts for more than one reason. Not only will she soon be leaving her daughter behind, but she will be giving up the only man who ever held her heart, and that is Royal.

Although it is very clear that Royal feels the same for Ainsley, she is worried for the safety of her new daughter, as her ex is equally relentless, vengeful and unpredictable. Things change to the point that she is forced to return to Royal - and her daughter. Now she has a chance at being a mother, but not without grave danger and difficulty for all involved.

The best solution is marriage between Ainsley and Royal. But has too much time passed for them to act on the feelings that once warmed both their hearts? The travel to love in this story is incredibly touching. Watching the pair fight the battles facing Ainsley, the family growing together, and the bevy of other family members involved, especially Angus, was absolutely wonderful.

Vanessa Kelly is a USA Today Bestselling, award-winning author who was named by Booklist, the review journal of the American Library Association, as one of the “New Stars of Historical Romance.”0 Her Regency-set historical romances have been nominated in a number of contests, and she has won multiple awards, including the prestigious Maggie Medallion for Best Historical Romance. Her books have been published in nine languages.

When she’s not dreaming of plots for her next Regency novel, Vanessa is writing USA Today Bestselling books with her husband, under the pen name of V.K. Sykes. You can find Vanessa at vanessakellyauthor.com or at vksykes.com. For all of Vanessa's latest news and contests--and to receive a free story--please sign up for her newsletter on her website.