BLOG TOUR - A View Across the Rooftops 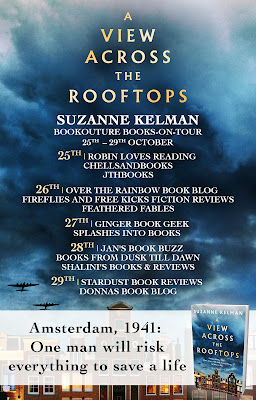 Today is my stop on the Blog Tour for A View Across the Rooftops by Suzanne Kelman.

1941, Nazi-occupied Amsterdam. An unforgettable story of love, hope and betrayal, and a testament to the courage of humanity in history’s darkest days.

University professor Josef Held has never recovered from the loss of his beloved wife – and has no intention of ever letting anyone new into his quiet, safe world. It is a world where the clock ticks steadily in his mathematics classroom, even as the sinister beat of Nazi soldiers’ boots threaten to drown it out.

Terrified, Josef tries to keep his eyes on the ground as Jews across the city are forced into ghettos. But then Michael Blum, his most reluctant, infuriating pupil, tells Josef Jews like him will no longer be allowed to study at all. Josef can ignore the situation no longer. And, after the shock of seeing his neighbour killed on his own doorstep, he offers Michael a place to hide in an impulsive act of courage.

Michael is everything Josef is not: spontaneous, poetic, and unafraid to love. Even though his passionate relationship with a Dutch girl is strictly forbidden – for he is Jewish, and she is not. Somehow, in the quiet gloom of the attic, Josef doesn’t mind things about Michael that annoyed him in the classroom, and a bond begins to grow.

Remembering the pain of his own heartbreak, Josef is desperate to give Michael and his girlfriend a chance. He must go on as if nothing has changed: teaching his class, bowing to the Nazis. Beneath the fear, a thrill of defiance begins to bloom. But then Michael becomes perilously ill, and there is no way to get him the help he desperately needs.

As the dark days of war continue, with danger and betrayal at every turn, no-one can be trusted. If Michael is to survive and get back to the woman he loves, it will be down to Josef – to find the hero inside himself, and do whatever it takes to keep Michael alive. Even if it means putting his own life on the line.

A heartbreakingly beautiful story about love, trust, and courage against the odds, perfect for fans of The Tattooist of Auschwitz, Lilac Girls, and The Nightingale. 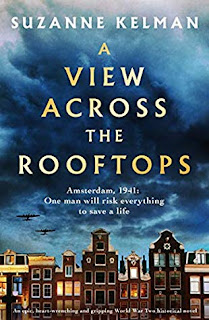 Oh my goodness! Evocatively unsettling yet hauntingly beautiful. That is what A View Across the Rooftops translates to me. The setting in this touching tale is that the Nazis have occupied Amsterdam. They are working feverishly at extinguishing any Jews, individually and collectively.

Professor Josef Held is struggling as a math professor. On a personal level, he has never gotten over the loss of his wife. With regards to his job, it is become more and more difficult. Some of his students are simply not interested, as the war is in full swing. Before long, any Jewish students that he was teaching are forever gone.

Josef is sympathetic and compassionate. One thing that soothes his soul is the nightly piano music that he hears his elderly neighbor Mrs. Epstein play. When she loses her life to the Nazis, Josef is more than devastated and even feels partially responsible. Right after this occurs someone comes banging on his door. Josef is concerned the Nazis are back, but why? The person at the door, however, is a terrified former student, Michael Blum, a Jew on the run for his life.

Josef doesn't think twice. He pulls Michael inside and offers him a place to hide. This is not just for the night either. Josef manages to hide Michael for years. Things are incredibly scary and dangerous for both Josef and Michael. This is especially so because Josef's niece Ingrid is dating a high-level SS officer and is seemingly overly concerned for her uncle's welfare.

Meanwhile, the story has some romantic elements. Before Michael had to flee, he was in a passionate relationship with Elke, a young Dutch woman, and they were forced apart. Furthermore, there is Hannah Pender. She is a woman who works at the college. Josef is surprisingly drawn to her, but since he believes her to be a married woman, he fights his powerful attraction to her.

When you pull in all of these characters, Josef, Michael, Elke, Hannah, Ingrid, as well has her new fiance, Heinrich, the story is incredibly powerful - and increasingly dangerous. I read this book with bated breath. I cried, I grieved and I hoped. Josef's heroic actions were so powerful, as well as Michael's strength. After all of this, I was left both heartbroken and satisfied. Suzanne Kelman is a new name to me and she has floored me with this book.

Thank you to NetGalley and to Bookouture for this ARC for review. This is my honest opinion. 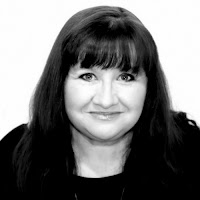