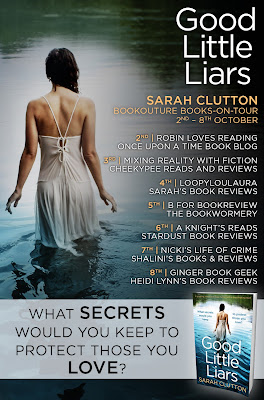 Today is my stop on the Blog Tour for Good Little Liars by Sarah Clutton.

Your school friends know who you were before the flattering haircut, the great career, the loving family. They know secrets you’ve kept...

It’s been twenty-five years since Emma graduated from the prestigious Denham House Girls’ School. She thinks she’s finally shaken the shadow of the awkward, neurotic girl she was at school. But as a class reunion approaches, Emma finds herself right back there, moving into the headmaster’s old staff cottage with her daughter while her marriage implodes. It’s here though that Emma finds a photograph that had been hidden away: an explicit image of her school-friend Tessa, staring boldly at the camera, dated the day before her death.

Between catching up with old friends Marlee and Clementine, home for the reunion, and the demands of single parenthood, Emma has enough to distract her. But she can’t shake the image of the photograph. And the thought that this is proof of something she has long suspected: Jon Brownley, the current headmaster, was involved with Tessa. Emma had seen them arguing in the school grounds back then, and always regretted not speaking up after the death was ruled an accident. Now she’s certain she let Tessa down.

Marlee and Clementine have their own complex feelings about returning to their hometown. And when Emma starts to question what really happened to Tessa, all women must deal with the consequences of decisions they made all those years ago. Because the more Emma digs into the past, the more she discovers that everyone remembers it differently, and that the innocent schoolgirls she thought she knew, might be hiding some very big secrets.

A page-turning novel about family drama, lies, and the secrets we keep to protect those we love. Perfect for fans of Liane Moriarty, The Silent Wife and Kerry Lonsdale. 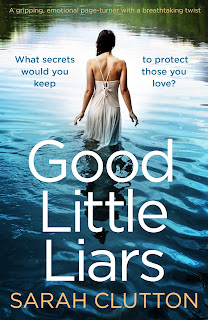 Let's just plan a reunion. Attend it. And have a good time. That should have worked for Emma. But, even after twenty-five years, the death of her friend Tessa still haunts her. Not only is the loss still devastating, Emma kept a secret that just might have to finally be revealed.

For starters, Emma is now staying in the very cottage the school headmaster used to live in. In this cottage Emma found an explicit picture of Tessa all of those years ago. This picture, coupled with the secret Emma as kept, makes her worry that Dr. Jon Brownley might have been responsible for Tessa's death.

Meanwhile, Emma is trying to catch up with old friends Marlee and Clementine. All three women are at crossroads in their life, and this reunion is bringing about bad memories and difficult feelings. This story fluctuates between the drama in each woman's life now, while at the same time snippets of the past are revealed. As this is done, secrets are slowly revealed.

Good Little Liars is a mix of family drama, angst, lies and secrets. This was a captivating story that was set in Tasmania, and that made it even more interesting to read. I love the way the author described the area and this led to a nice feeling while reading a very well-written story. 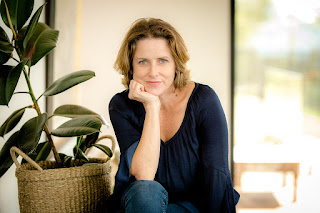 Sarah Clutton is an Australian author and former lawyer whose debut novel, Good Little Liars, mixes suspense and domestic drama with nuanced characters. Having majored in psychology in her original degree, Sarah is fascinated by people. How does the past shape us? Can we can learn empathy? What determines the outcomes when moral and legal boundaries collide?

Sarah's work earned her the Dymocks/Fiona McIntosh Commercial Fiction Scholarship in 2018, a coveted national award run by one of Australia's most successful commercial fiction authors and sponsored by Australia's largest book chain. An alumna of the Australian Writers' Centre novel writing course, and with a mostly-finished Master of Arts (Writing) that she has no interest in finishing because she prefers making stuff up, Sarah lives with her family in the very pretty tourist town of Bowral, near Sydney. She has lived all over Australia, and if she didn't live in Bowral, she would live in Hobart, the most beautiful city she knows.