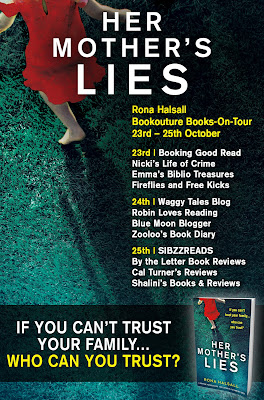 Today is my stop on the Blog Tour for Her Mother's Lies by Rona Halsall.

What if the person you trust most in the world, has been lying to you for your whole life?

Martha would do anything for her devoted mother, Fran. Now in her mid-twenties, Martha still lives with her in their remote, pretty cottage in the Cornish countryside. Fran paints illustrations, while Martha trains to be an animal nurse.

But then Martha sees a strange message on her mother’s phone – apparently from her estranged father.

He had been there for her first steps. He’d helped with her homework, and taken her for ice cream at weekends. And then, two days before her ninth birthday, he walked out. She never knew what went wrong, and she and Fran never heard from him again.

Desperate for answers, she tracks him down. But when they come face-to-face, she isn’t ready for the brutal truth.

Closing his eyes he says, ‘She hasn’t told you, has she? I’m not your father.’

Her mother has been telling lies.

And not just about who her real father is… 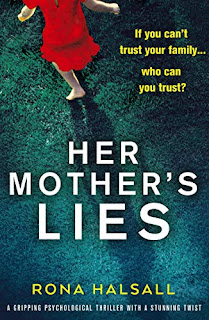 Martha has had a missing piece in her life for years. She remembers a loving father that did a lot of things with her. However, all she can remember is that after her ninth birthday, she never saw him again. She never was able to get much of an answer about her father from her mother.

When she discovers a rather odd message on her mother's phone, Martha feels it is finally time for her find the answers she most desperately needs. She does a remarkable job and she finally finds him. Martha is devastated beyond belief when he actually tells her that he is not her father.

Fran isn't saying a word. Fortunately Martha meets Izzy and they become fast friends. Izzy becomes extremely helpful and this is really a good thing. This is so because what Martha has to learn about her father's identity is really too much to bear. There is someone else in Martha's life at this point, her neighbor Anna. Anna is also there for Martha.

Boy as I was reading this I felt that Martha might have wished she never wanted to know the truth. Her Mother's Lies was a very well-written story. It made complete sense as to why Martha's mother chose to lie to her. Logical, but extremely heart-breaking. Martha has a lot to discover, and as a result, a lot to deal with.

What Martha learns about her mother Fran makes perfect sense when it comes to seeing why her mother has deteriorated. Martha resents her mother's drinking. She resents being the primary breadwinner. Her feelings of anger towards her mother grow exponentially the closer she gets to Izzy.

There were a lot of surprises in this book. This is a story about lies and secrets. I couldn't help but turn the pages quickly one after another. I felt for Martha when it came to her dealing with her mother, and especially how she was forced to deal with the revelations as they were exposed. This is an excellent read and my second by Rona Halsall. She writes great twisty tales that definitely capture my attention.