Review - Too Close to Breathe 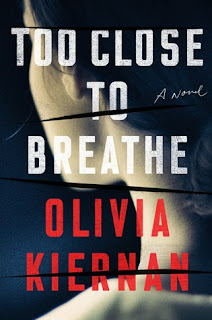 TOO SOON TO SEE

TOO LATE TO HIDE

DCS Frankie Sheehan is handed the case, and almost immediately spots foul play. Sheehan, a trained profiler, is seeking a murderer with a talent for death.

TOO CLOSE TO BREATHE

As Frankie strives to paint a picture of the killer, and their victim, she starts to sense they are part of a larger, darker canvas, on which the lines between the two blur.

Olivia Kiernan's debut is a bold, brilliant thriller that will keep you guessing and leave you breathless.

In Dublin, DCS Frankie Sheehan is called to a scene of an apparent suicide of a microbiologist named Eleanor Costello. With her experience she quickly realizes that this was no suicide. It was murder. Frankie has just returned to work after an attack which left her injured and now she’s dealing with PTSD. In order for her to move ahead working is the best medicine for her.

Upon investigation, Frankie realizes that a clue found at the home of the murdered woman has led to the dark web and focuses on something extremely dangerous. In fact it was called the Black Widow and is involved in dangerous practices. Frankie and her team go undercover and as they do so they know that whoever was responsible for that murder and others is somebody that is frequenting that website.

The case in which Frankie was hurt which involved a woman named Tracy Ward has now come full circle. This is because it seems that these murders are somehow connected. Will Frankie be able to get to the bottom of everything?

One of the things that I liked about the story is how weird the circumstances presented was. The twists and turns as in many police procedural stories are not unexpected. But in Too Close to Breathe they were done very well and most assuredly kept my interest. Even though the matter at hand was dark, Frankie’s style, as a profiler, was meticulous, and I was enthralled at how she handled these scenarios. I look forward to following her future stories.

This debut story marks the beginning of the Frankie Sheehan series and it is followed by The Killer In Me. I enjoyed this story and I also have already read the second one and enjoyed that as well.