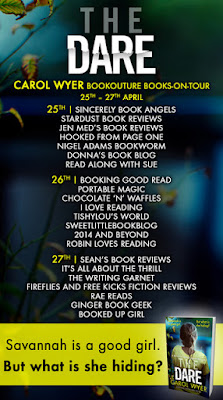 Today is my day for the Blog Tour for The Dare by Carol Wyer.

Jane’s daughter is a good girl. What is she hiding?

When thirteen-year-old Savannah Hopkins doesn’t come straight home from school, as she always does, her mother Jane immediately raises the alarm.

Leading the investigation is Detective Natalie Ward whose daughter Leigh is the same age as Savannah. Soon Natalie’s worst fears are confirmed when the teenager’s broken body is found in nearby shrubland.

Evidence points towards a local recluse, but just as the net is closing around him, one of Savannah’s friends, Harriet, is reported missing.

As Natalie delves into the lives of both girls, she soon discovers a sinister video on their phones, daring the girls to disappear from their families for 48 hours.

But Natalie isn’t quick enough for this killer, and she is devastated to find Harriet’s body on a fly tip a day later.

Caught up in the case, she takes her eye off her own daughter and when Leigh goes missing after school she knows she must be in terrible danger. The clock is ticking for Natalie. Can she catch this killer before her little girl becomes the next victim?

This gripping rollercoaster of a read will have you up in the small hours turning the pages. Fans of Angela Marsons, Rachel Caine and Robert Dugoni will love The Dare. 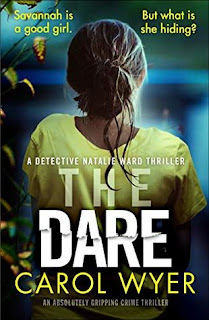 One afternoon, Jane Hopkin's daughter Savannah didn't come home from school. Jane takes immediate action, including phoning her friends. Sadly Savannah's body is discovered. The missing teen becomes DI Natalie Ward's case. This is especially hard for Natalie. For starters, she has a daughter, Leigh, the exact age, so that alone makes the case difficult. Also, Natalie has had other arduous cases involving the death of children. Also, Natalie's marriage is quite strained, so that doesn't help things considering the time and attention she must place on this case.

Natalie begins her investigation and questions several potential suspects, to the point when she is fairly certain that one particular person could be responsible. However, in just a day, another teen girl goes missing. Did they know one another? Are their cases connected? To make matters worse, the unimaginable happens in Natalie's own family.

The story is mostly told by Natalie's point of view. However, there is another view in the story, that of the killer, and of their plans to harm other girls. And, after the second girl disappears, a very brief, but horrifying video is discovered. This alerts Natalie and her team to a morbid website referring to the Disappear Dare. This is a very dangerous social media challenge where a teen agrees to go off grid for a short time. Could Savannah and the other missing girl, Harriet, have been playing that game?

The Dare is the third compelling story in the DI Natalie Ward series. It is quite a remarkable read, affecting on many levels. I have read most of Carol Wyer's books and each time I pick one up I find them to be utterly thrilling. I read this exceptional book in one sitting. I simply could not put it down. I was hanging on the edge of my seat as this book reached a crescendo. I definitely cannot wait for the next book in the series.