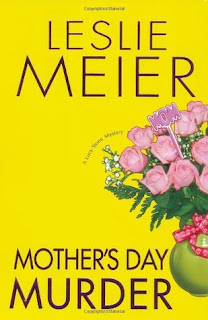 Two of her four kids may be out of the nest, but Lucy Stone knows only too well that mothering is a lifetime commitment. At least she gets to kick back and enjoy a fancy Mother’s Day brunch with her brood—that is, before the festivities are interrupted by a nasty scene courtesy of Barbara Hume and Tina Nowak. Opposites in every way, the only thing these mean moms have in common is the need to best each other at every turn, using their teenage daughters as pawns in elaborate games of one-upsmanship

Even after witnessing the women’s claw sharpening rituals, Lucy never expects to see actual blood spilled—until Tina is shot dead on the public tennis court. Now Lucy is determined to unravel the close-knit knot of suspects. But when the threads threaten to entangle one of her own, Lucy will come face-to-face with a killer who has a thing or two to learn about motherly love…

Aaah, it is Mother’s Day and Lucy Stone is having an an enjoyable day with her family. While eating out, the nice atmosphere in the restaurant is disturbed by a woman upset that she and her family didn’t get a specific table. The woman, Barb Hume, and the woman she was sniping at, Tina Nowak, already had bad reputations. As a matter of fact, they were known ad mean moms.

When one of them is shot dead in a public place, Lucy, the ever-enthusiastic amateur sleuth, is bound and determine to getting to the bottom of things.

I am quite familiar with Lucy, as I have read each book in the series to-date. I enjoy her efforts at balancing her insatiable need to solve murders, all while being a busy housewife, mother and reporter. I enjoyed this story for the most part, and was rather saddened when the killer was identified.

This was a fast-paced read that I devoured in one sitting. The next book in this series is Wicked Witch Murder.