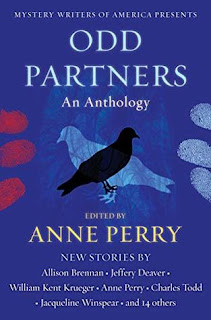 Throughout the annals of fiction, there have been many celebrated detective teams: Sherlock Holmes and John Watson. Nick and Nora Charles. Hercule Poirot and Arthur Hastings. Thomas and Charlotte Pitt. The latter were the creation of beloved mystery writer Anne Perry, the editor of Odd Partners. With this collection, Perry has enlisted some of today's best mystery writers to craft all-new stories about unlikely couples who join forces--sometimes unwillingly--to solve a mystery. From Perry's own entry, in which an English sergeant and his German counterpart set out to find a missing soldier during WWI, to William Kent Krueger's story of a fly-fisherman and a gray wolf in the Minnesota woods trying to protect their land from a brash billionaire, to Robert Dugoni's psychological tale of an airplane passenger who wakes up unsure of who he is and must enlist his fellow passengers to help him remember, each mystery deals in the complexities of human (and animal) interactions.

The collection features stories by New York Times bestselling authors Ace Atkins, Allison Brennan, and Robert Dugoni, as well as Edgar Award winner Joe R. Lansdale and selected members of Mystery Writers of America. With each author's signature brand of suspense, these stories give new meaning to the word "teamwork."


Odd Partners is a very well-done anthology that comprises of very short stories by 19 prominent authors. This read was edited by Anne Perry. The list of authors were culled from the Mystery Writers of America. Listed in alphabetical order, they are:

I thoroughly enjoyed the stories. It took only a moment to accept the quick revolution of each one as it was told. Having only read Anne Perry previously, although some of the other names are certainly well-known, it was a wonderful way to be introduced to authors that I definitely want to put on my TBR.

As the description shows, each of these titles are new. One title that was quite intriguing to me was Robert Dugoni’s The Last Game, about a man who was an airplane passenger getting help from his fellow passengers. It was done with precise accuracy and definitely grabbed my interest. Then the was the short story, Oglethorpe’s Camera, by Claire Ortalda. This was about a woman and her cat, but, it was far, far more. There were a couple of very touching stories and then a rather odd story. This review would indeed be very long if I were to recount other favorites, never mind each entry.