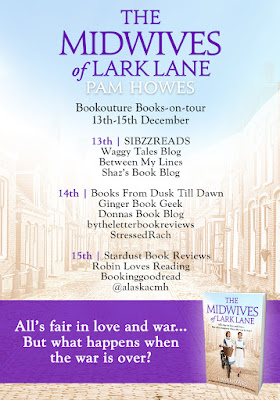 Today is my day for the Blog Tour for The Midwives of Lark Lane by Pam Howes.

All’s fair in love and war… but what happens when the war is over?

After the heartbreak of World War Two, newlywed midwife Cathy hoped Liverpool life would offer some joy. But a terrible miscarriage and the escape of her abusive stepfather Jack from prison make happiness hard to find.

Meanwhile, Cathy’s beloved granny is ailing. Whilst at the hospital, Cathy sees her midwifery friends, who are planning to open a home for unmarried mothers. After losing a baby of her own Cathy would love to help, but for now, she must take care of her grandmother.

As her granny’s health worsens, she writes Cathy a letter. The day her grandmother dies, Cathy goes home and opens the envelope: Thank you for giving me a reason to live. Everything I have in the world is yours now, my darling. Cathy is devastated but determined to honour her granny’s memory, hoping the maternity home can be her legacy.

Just as Cathy and her friends are about to open their doors to the first expectant mothers, Jack is spotted in Liverpool. It’s only a matter of time until her cruel stepfather catches up with her, determined to pay her back for getting him locked up in prison. Can Cathy keep herself and her grandmother’s legacy safe, and see Jack sent away for good at last?

The Midwives of Lark Lane is a heart-wrenching saga about how the best friendships can help you through the worst of times. If you’re a fan of Nadine Dorries, Diney Costeloe and Kitty Neale, you’ll love Pam Howes! 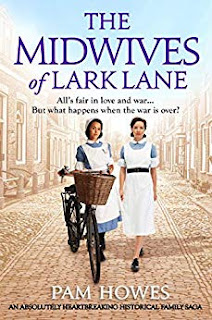 The first three books in this compelling story, The Factory Girls of Lark Lane, The Shop Girls of Lark Lane and The Nurses of Lark Lane were all  set around the war. With the war now being over, our intrepid ladies have moved on and, as in the previous books in the Lark Lane series, are dealing with adjustment and some difficulties. Nonetheless, they are indeed troopers and rally on, with the strong bonds of friendship proving to be the driving force in this wonderful book by Pam Howes.


Cathy, a midwife, and a newlywed, has not found much happiness considering she has suffered a miscarriage and has received received sad news about her ailing grandmother, as well as the awful news that her abusive stepfather Jack has escaped from prison. As this book is told in more than one perspective, readers get Jack's point of view, and he is just as awful (actually much worse) as he has always been in the books in this series. With her grandmother's health failing, Cathy is even more devastated.

A nice diversion proves to be an excellent idea when Cathy and a couple of her midwife friends decide to open a home for unwed mothers. As the time frame in this book is around the 1960's, the girls know the challenges will be many. Fortunately, albeit sadly, Cathy has received something very precious left to her in her grandmother's will that will make this possible.

Meanwhile, there is Jack Dawson, Cathy's stepfather, and he is determined to find her and it is not to bring her a bouquet of flowers. Instead, he means on doing her great harm. So Cathy has her hands full, doing good for young ladies who need a safe place for whatever length of time would suit them, and staying away from Jack.

I have been with this compelling series from the very first book and have devoured each and every one of them. Prior to this series, Pam Howes was a new name to me. I have come to love her prose. She has a gift of storytelling and her characters felt so very real to me. Their problems, their joys, their love, their tears ... it all resonated with me. I do not know what is next for Ms. Howes, but I will definitely be on the lookout.

Pam recently signed a second contract with the award winning publisher Bookouture and the first novel in her new Lark Lane series, The Factory Girls of Lark Lane, will be published in July 2018. Her first series for Bookouture - The Mersey Trilogy - is available in E book, paperback and as audio books.