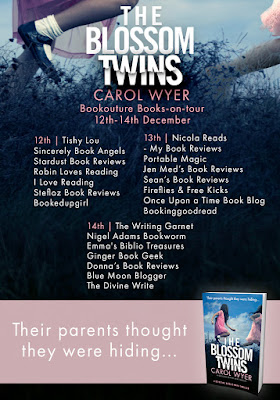 Today I am quite pleased to be a part of the Blog Tour for The Blossom Twins by Carol Wyer. If you thought this series couldn't get any better, think again.

Their parents thought they were hiding…

One beautiful summer’s evening, thirteen-year-old twins Ivy and Erin Westmore snuggle down in a tent in their back garden, giggling and sharing secrets.

When their mother goes to wake the girls the next morning, their tent is empty.

The alarm is raised and Detective Natalie Ward is put onto the case. When the twins’ bodies are discovered on nearby marshland, covered with deep pink petals, an icy shiver travels down Natalie’s spine. Everything about the girls’ deaths reminds her of a horrifying case she worked on earlier in her career, which saw a killer of the worst kind placed behind bars.

The next day, that feeling is heightened when she receives a chilling note saying ‘I’m back’. Is this killer a copycat or did Natalie put the wrong person in prison all those years ago? In a small town, where no stranger goes unnoticed, what is Natalie missing?

Consumed by the case, determined to prevent more deaths, Natalie misses the fact that it is her attention the killer wants. And to get it, he has his sights set firmly on her precious daughter Leigh… 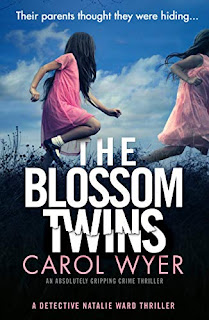 When a teen girl is killed, Detective Natalie Ward is fairly certain that a killer has resurfaced. In her mind, evidence points to a previous case with the moniker of "The Blossom Twins". With one girl having found dead, others are not so sure. But, before long, twins Ivy and Erin Westmore were found murdered, and due to a shocking clue, Natalie is more than convinced that the killer has indeed returned.

As pressing as these cases are, Natalie's personal and family life are in an upheaval. She is very unhappy with her husband David and knows she must make some serious changes. Not only that, Natalie knows she must put aside feelings for co-worker Mike until her situation with David is resolved. With two teens, Josh and Leigh, Natalie is undoubtedly worried. On the job, she has a new boss and he is rather unpleasant. Another issue at work is the appearance of DS John Briggs. Natalie worked with him on the previous murder cases and they really did not get along well.

Despite all of these concerns, Natalie is determined to discover who the killer is, why he stopped for several years, and why he is killing twins. Meanwhile, the killer's POV is relayed throughout the book. From beginning to end, my attention was sharply riveted, and I experienced more than one shocking twist.

The Blossom Twins by Carol Wyer is one of the most intense reads I have read in a long time. It was so difficult to put down, but I had to step away for a moment to take a very deep breath. I have no idea how Carol did it! I want so much for Natalie! I am so very eager for the next book in the series. Each book gets deeper and even better.

Many thanks to Bookoture and to NetGalley for this ARC for review. This is my honest opinion.