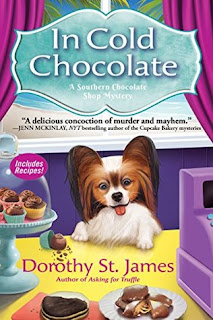 In Dorothy St. James’s third delectable Southern Chocolate Shop mystery, a new batch of chocolate and troubles of the heart cause a string of disasters for the Chocolate Box’s new owner, Charity Penn.

The vintage seaside town of Camellia Beach, South Carolina seems like the perfect place for romance with its quiet beach and its decadent chocolate shop that serves the world’s richest dark chocolates. The Chocolate Box’s owner, Charity Penn, falls even further under the island’s moonlit spell as she joins Althea Bays and the rest of the turtle watch team to witness a new generation of baby sea turtles hatch and make their way into the wide ocean.

Before the babies arrive, gunshots ring out in the night. Cassidy Jones, the local Casanova, is found dead in the sand with his lover Jody Dalton—the same woman who has vowed to destroy the Chocolate Box—holding the gun. It’s an obvious crime of passion, or so everyone believes. But when Jody’s young son pleads with Penn to bring his mother back to him, she can’t say no. She dives headfirst into a chocolate swirl of truth and lies, and must pick through an assortment of likely (and sometimes unsavory) suspects before it’s too late for Penn and for those she loves in Dorothy St. James’s third rich installment of the Southern Chocolate Shop mysteries, In Cold Chocolate.

Charity Penn, called Penn by her friends, is a relatively new resident to the town of Camellia Beach. She is now the owner of the Chocolate Box, which serves the world’s richest chocolates and some people are not happy about that. These include her estranged family and at least one of the town’s residents, Jody Dalton.

One night the town gathers to witness a batch of baby sea turtles hatching to in order to watch their journey into the ocean. However, while are approaching the ocean, they hear gunshots. A man is dead. His name was Cassidy Jones and he was the local Casanova. Oddly enough, Jody Dalton, the same woman that threatened to destroy the chocolate shop, is seen wielding two guns. It seems quite evident that she is the killer. The woman’s son begs Penn to prove that his mother is innocent. What a task!

This is not the first time that Penn has become involved in a murder investigation. As she begins to ask questions, much to the annoyance of the local police, it becomes quite possible that Jody is not the killer. Well, why did she have the guns in the first place, and if she is indeed innocent, who was it that killed Cassidy?

There is more going on than the murder. Turtle eggs on the beach are missing and chocolate turtles are being stolen from Penn’s shop - very expensive chocolate turtles. Meanwhile, there is a lawsuit pending against Penn and her shop is in a state of disrepair.

So with quite a bit facing Penn, along with her attraction to her neighbor, she seeks to divide her time in order to find answers. She has put herself in danger due to her actions. In this fast-paced story there are a lot of questions that need answering. Dorothy St. James does a great job at pulling many of these things together while capturing the readers’ attention, but there are some things that we are left to look forward to in the next book in the series.

Many thanks to Crooked Lane Books and to NetGalley for this ARC to review in exchange for my honest opinion. 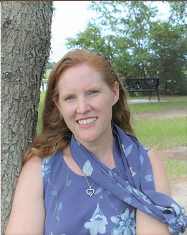 Mystery author Dorothy St. James was born in New York but raised in South Carolina. She makes her home on an artsy island community in South Carolina with her husband, a crazy dog, and fluffy cat. Though writing has always been a passion for her, she pursued an undergraduate degree in Wildlife Biology and a graduate degree in Public Administration and Urban Planning. She put her educational experience to use, having worked in all branches and all levels of government including local, regional, state, and federal. She even spent time during college working for a non-profit environmental watchdog organization.

Switching from government service and community planning to fiction writing wasn't as big of a change as some might think. Her government work was all about the stories of the people and the places where they live. As an urban planner, Dorothy loved telling the stories of the people she met. And from that, her desire to tell the tales that were so alive in her heart grew until she could not ignore it any longer. In 2001, she took a leap of faith and pursued her dream of writing fiction full-time.