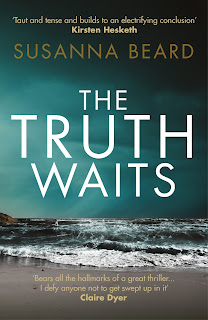 Today is my day for the Blog Tour for The Truth Waits by Susanna Beard.

‘This novel bears all the hallmarks of a great thriller. It not only deals with huge issues like greed, guilt, evil and revenge, but with Anna’s deeply personal search for justice, reconciliation, forgiveness and trust. Her journey takes her to the very limits of herself but, at its heart, The Truth Waits is also a story about love in its best forms and I defy anyone not to get swept up in it' Claire Dyer

Anna has everything worked out – a successful company, all the comforts she needs and no ties. But when she stumbles across the body of a young girl on a deserted beach in Lithuania, everything changes.

Anna is compelled to uncover the story behind the tragedy, despite concern from her partner, Will. Everything points towards sex trafficking, but as she searches, her own deepest secrets start to surface.

When Will disappears without a trace, Anna is pulled further into the murky world of organised crime. Time is running out for them all, and there’s a killer out there who will stop at nothing.

Beard enthralls the reader in this fast-paced psychological crime thriller. Anna serves as the perfect power-house protagonist, her daring escapades leaving the reader questioning: how far should one go to solve a murder?

‘I very much enjoyed reading The Truth Waits. It is taut and tense and builds to an electrifying conclusion' Kirsten Hesketh

‘I enjoyed Susanna’s emotive and thought-provoking novel - I thought it was an engrossing mystery and loved the Lithuanian setting. She dealt with some dark themes and created great three-dimensional characters, especially Anna, who was complex and engaging. I wanted to go along with her in her journey for finding the truth' Sam Carrington

Anna's very successful business brings her to Lithuania. She has traveled all the way from London and is getting anxious to return home. However, there has been a volcanic eruption and all travel has ceased. So she is stuck. She is trying to make the best of it until at least the airlines are running again.

She decides to take a walk, and when she is near the beach she discovers the body of a young girl. Horrified, she contacts the police right away. They make a quick investigation and ask her a few questions. She gets rather annoyed, however, when she notices that the death of the girl is barely mentioned in the media.

While waiting at the hotel, Anna meets a few people, including Gavin, his wife Charlotte, and a travel journalist named Will. He tells her about some of the articles he's worked on, and he mentions sex trafficking. This is an activity that is prevalent in countries like Lithuania. Due to what Anna has learned from Will, among other things, she wonders if that could have played a role in the young girl's death. If so, why aren't the police doing more?

She decides to investigate things herself, despite being warned by Will and others to leave matters alone. Anna and Will draw closer together, but suddenly Will disappears. Anna starts wondering if he could have a role in the nefarious activities that went on while they were in Lithuania.

This story vacillates between the criminal activity of organized crime, drugs, and the aforementioned sex trafficking. The Truth Waits also delves into the pasts that Anna and Will seek to hide, and deep emotions that affect Anna in several ways. It is quite a compelling, if not often tragic, story. Although it was a stressful read at times, I was pleased with the conclusion.

Many thanks to Legend Press and NetGalley for this ARC to review in exchange for an honest opinion.

Susanna Beard studied Linguistics before embarking on a career in PR and marketing. She has helped a multitude of clients promote everything from tourist destinations, to Californian wine, to cuddly toys.

Dare to Remember is her first novel, followed by the greatly anticipated The Truth Waits.

- Author graduate of Faber Academy
& included in the 2015 Faber