BLOG BLITZ - For Once in My Life 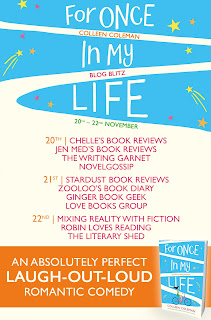 Today is my day for the Blog Blitz for the book For Once in My Life by Colleen Coleman.

Twenty-nine-year-old Lily Buckley planned to be happily married and in her dream job by now. Instead she’s been single since being left at the altar three years ago, and works at her local paper, writing about two-foot-long courgettes at the summer fete and a dog who looks exactly like Chewbacca.

Not quite what she was dreaming of.

So when Lily’s given the opportunity to write her own column it’s exactly what she’s always wanted – except what she has to write about. She has to do one thing every week that scares her.

With encouragement from sexy colleague – and adrenalin-junkie – Christopher, Lily agrees. From sky-diving to haunted houses, Lily is going to be pushed to her limit. But Lily is hiding something – the thing that she fears the most of all…

Ever since her heart was broken Lily has been afraid of falling in love again. Will fear hold her back once more – or can Christopher help her to finally find happiness?

An uplifting, feel-good story about friendship, romance, and finding the hero inside yourself. Fans of Marian Keyes, Mhairi Macfarlane and Sophie Kinsella will love Colleen Coleman! 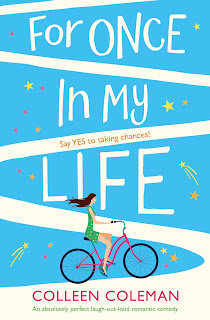 Lily Buckley has spent the last three years getting over a tragic and humiliating experience. She was left at the altar and has rebuilt her life. She has been at her job at the Newbridge Gazette for seven years. Things gets shaky for Lily yet again. The newspaper is floundering. As a matter fact, it may just close down. But another chance presents itself. Lily suddenly becomes acting editor in chief of the regional newspaper.

Things are certainly not cut and dried from this point on. Not at all. The powers that be have hired a team of people that includes Christopher, and he is a transformational consultant. The newspaper has a single shot of sinking or swimming. Ultimately it must be determined whether or not Lily and Christopher can work together to save the newspaper. For Lily’s sake it is to keep her job and career going in the direction that she has been focused on. For Christopher, this is a steppingstone to his future aspirations.

Quite naturally, the entire scope of Lily’s job has changed. Christopher and the team decide on a unique approach to reviving the newspaper. Lily’s weekly column will now become a four page spread with a bucket list in which tasks are completed weekly. They are extremely hopeful that this will increase readership.

Lily may be focused on the importance of saving her career, but her eyes are now open to new possibilities, and this was truly a delight. Lily experiences quite a lot while working on her bucket list. This required her to do things that she would never have tried before. While there is humor in the story, even at laugh out loud places, the story is rich with sensitivity and growth. We see the characters develop in certain ways and that makes the story very captivating.

As readers are drawn into the romance that blossoms between Lily and Christopher, it is also a very touching to see how Lily’s relationship with her mother changes. I was very interested in things as they were working out. If I may interject, I must say I was impressed by the fact that one of Lily’s favorite activities was to curl up with a good book..

I rather enjoyed how this book is marketed. It is first a woman’s fiction, then a romance. I think this is important to mention because we get to see Lily grow as a character. Yes, lovers of romance want a happy ending. But Lily’s life was once turned upside down and getting the opportunity to see her achieve personal growth was very rewarding to me as a reader. The cherry on top was the romance that was indeed part of the story.

This is the first book that I’ve had the opportunity to read by Colleen Coleman and I can definitely say that she is an author that I will follow in the future. 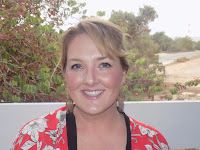 Colleen was born in Canada and raised in Ireland. She is the winner of the much-coveted Novelicious Undiscovered People’s Choice Award launched to find the next ‘chick-lit star’.

She spent years teaching English and Philosophy before finally taking a deep breath, scrunching both eyes shut, putting her pen to paper and vowing not to lift it again until she wrote the words 'the end'. As a result, her first novel, Don't Stop Me Now was born.