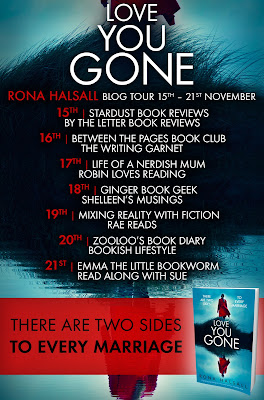 Today is my day for the Blog Tour for Love You Gone by Rona Halsall.

‘Hello? Police? My husband and our children… they’re gone.’

When Mel arrives at the holiday cottage in the Lake District, she expects to find the heating on and her husband Luke and the two children waiting for her. Maybe a bottle of wine open…

Instead, there is just a note on the side, saying they’ve gone out for a walk.

But they aren’t back several hours later, and Mel knows something is wrong. Really wrong. When a search doesn’t find them, she has to confess to the police that her marriage isn’t all that it seems.

Even if that risks her own secrets being revealed…

An absolutely incredible, page-turning psychological thriller with a twist you won’t see coming, for fans of Gone Girl and Behind Closed Doors and Ruth Ware. 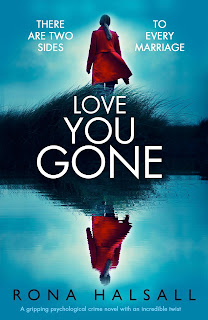 Mel has a very serious issue. She is going to a holiday escape with her husband, Luke, and their children with the primary purpose of trying to restore some happiness in her family. But she is greatly disturbed. When she gets there the cottage is empty. They went ahead of her because she was detained by work. She is very concerned but she notices that the car is in the driveway and there is a note saying that they went for a walk.

She does what she can to relax. At the very least she can start a fire so that the cottage will be comfortable when the family gets home. But after several hours she has no choice but to call the police and even mountain rescue to try and locate her family. After talking to the police she feels that they will be found relatively soon.

However, the police turned up nothing. So they continue going back-and-forth speaking to Mel to try to find out what information they can. Mel starts filling them in on certain details bit by bit making them rather curious about what really is going on.

Meanwhile another perspective is introduced into the story and it is done from the past working its way to the present. The reader, and definitely the police, begins to see that things were not as they seem in the marriage. There were problems, very deep problems.

The story turns from an intense psychological thriller into a very dramatic family drama. There are circumstances that Mel and Luke are dealing with that are very traumatic, so much so that things begin to make sense.

I was on the edge of my seat while reading the story. Not only did I want the family to be safe, I wanted resolution for the problems that Mel and Luke were dealing with in the marriage. Especially since there were two children that were very much affected by everything that was happening.

This was an incredible story written very well. There is drama, as well as secrets and an incredible family dynamic. This riveting story completed itself with a surprising conclusion. 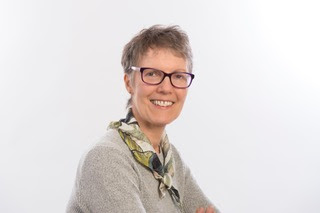 Rona's debut psychological thriller, Keep You Safe came out on 17th August and her second novel, Love You Gone is out now.