BLOG TOUR - Before She Falls 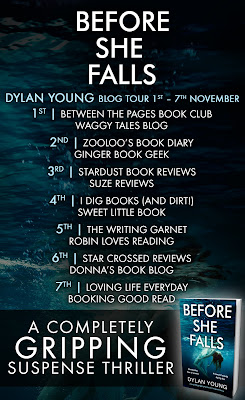 I am pleased to be a part of the Blog Tour for Before She Falls by Dylan Young.

Kimberley was a beautiful young girl with the world at her feet.
Before she fell.
Before she was gone.

When Kimberley Williams jumps off Southdown Cliff, her family and the close-knit community are shocked. What would make her take her own life when she had so much of it left to live?

Detective Anna Gwynne is assigned to the case after it becomes clear that someone made Kimberley jump. Someone had been sending Kimberley messages, saying they would tell everyone her secret…

Then Anna realises there are others, all being sent the same messages, all with their lives at risk. To find the truth she will have to confront her own past, the lies she’s told about her childhood and the demons hidden there…

Can she save these innocent lives?

What is the secret they’re all dying for?

An absolutely gripping thriller that will hook you from beginning to end. If you love Val McDermid, Angela Marsons and Robert Dugoni, you won’t be able to put down Before She Falls. 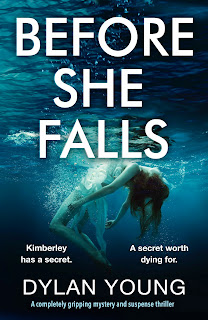 When Louise Griffiths sees a woman while walking her dog, she immediately senses that something is wrong. For one thing, there is a lost, hopeless expression on the girl’s face. To Louise's incredible shock, the young woman runs towards the sea and suddenly jumps in the water.

It is now five months later and DI Anna Gwynne is assigned the case of the apparent suicide of a sixteen-year-old girl. The very girl that the woman had seen previously. The young girl was named Kimberley Williams. Anna is horrified that the police have learned that due to her social media and Internet activity she may have been involved in a suicide game. This horrid game is responsible for the deaths of 130 young people.

This case comes close to home for Anna. When she reaches her boss he lets her know that a previous case that she worked on will give her great insight as to what happened to Kimberley. Anna is none to pleased to have to deal with serial killer Hector Shaw again.

As the investigation takes off, Anna and her team are led to two dead bodies. Evidence proves that all three murders are connected. Are more young people destined to become victims? Not if Anna has anything to say about it. Her new case is certainly going to keep her very busy. As it is she has a dog and a lover in her life. And, as if things aren’t tough enough, her past comes before her, front and center. Her family dynamic is off-kilter.

Anna is a seasoned detective and leaves no stone unturned. Her professional relationship with the brutal serial killer reveals the cause for his terrible killing spree. Will Anna be able to use what she is forced to learn from him to stop the deaths? Meanwhile, Anna must contend with the peril social media can cause. This definitely made me stop and think for a moment.

From the very start this was a very intriguing story. I found it to be rather unique, connecting a disgusting game to the deaths of young people, as well as Anna’s knowledge of the serial killer and his motives. As an extension, the serial killer is connected to the case at hand. Before She Falls is a chilling, one-sitting read. It is full of twists and turns, and certainly has a shocking conclusion.

This is the third book in the series. Although I didn’t have the opportunity to read the previous stories, this did well as a standalone. The previous books in the series are The Silent Girls and Blood Runs Cold. 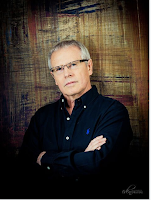 Dylan Young grew up in a mining village in South Wales before boarding a train for university in London. A career in the NHS followed, but the urge to write never went away. Three dark psychological thrillers for Random House emerged in the late nineties, two of which were made into BBC films. Over the last decade, under different pseudonyms, he’s written children’s books and an adult contemporary fantasy series. But his liking for crime (writing) never died. Book 1 in the Detective Anne Gwynne crime thriller series, The Silent Girls, and Book 2, Blood Runs Cold, are available now.