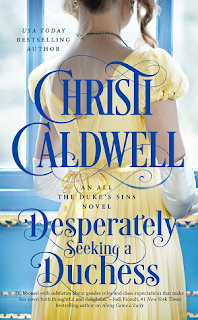 Title:   Desperately Seeking a Duchess
Author:  Christi Caldwell
Series:  All the Duke’s Sins #2
Publisher:  Berkley Books
Genre:   Historical Romance
Format:  Kindle ARC
No. of Pages:   336
Date of Publication:   May 24, 2022
My Rating:   4 Stars
DESCRIPTION:
What happens when an impoverished duke with a reputation for being a rogue collides with a strong-willed heiress who wants to explore the world? An unlikely friendship...and unexpected passion.

Cailin Audley doesn't fit in with Polite Society. A life spent among the working class taught her to value her independence in a way no newfound fortune or glittering ballroom could ever erase. When a major misstep sees the new heiress whisked away to the English countryside, Cailin soon realizes the vexing lengths her family will go to see her settled. But having risked her heart once before, Cailin has no interest in the men of the ton--especially not the frustratingly charming Duke of St. James.

Courtland Balfour, the Duke of St. James, devoted brother and notorious rogue, despises what he must become--a fortune hunter. But with the ducal coffers drained by his late, spendthrift of a father, Courtland knows his duty lies at the altar and he will do anything to ensure a future for his siblings. Just his luck that the one lady who could make this new fate bearable, who enflames him like no other, is the one woman who wants nothing to do with him or his title.

But when an act of desperation inadvertently lands he and Cailin at the heart of another scandal, Courtland knows better than to waste his chance. Surely he can convince Cailin to love him?
Link to purchase the book
MY THOUGHTS:
Cailin Audley is an heiress to a father that didn’t raise her. She was a “by blow”, but her father, a Duke, wants to bring her into London society and provide her with a season. Courtland Balfour, the Duke of St. James, has his reasons for impersonating his twin Keir when he originally meets Cailin. Although the two share an instant attraction, they almost immediately part ways and the next time Courtland sees Cailin it is London. She has a few things to say to him, but he acts as if he doesn’t even know her. It doesn’t take her long to realize that he is an identical twin and at least some deception had taken place.
Courtland has a huge issue. Notwithstanding the fact that he is a notorious rogue, he is responsible for all of his siblings and needs to provide seasons for his younger sisters. However, his family is nearly destitude thanks to the irresponsible ways of his deceased father. Marrying well might be the only way to keep his family afloat. However, he does not want to marry for money, especially if it seems in any way he will repeat any of the actions of his father.
As far as Cailin is concerned, as her heart was previously broken, she is determined never to marry. She has her reasons for wanting to be in London and finding a husband is the last thing that she has in mind. It perplexes her, however, as to how drawn she is to Courtland, but being more than aware of his reputation, she intends on keeping her distance.
In this endearing story by Christi Caldwell, it is impossible not to love both Cailin and Courtland, and actually all of the Audley and Balfour families. This is the second book in a series and I have not read the first book. Although I feel that I got the full experience when reading this story, it was easy to see how the author incorporated Rafe and his wife in this story and that’s when I realized that they had to be the primary protagonists in the first book, which is something I want to go back and read.
I thoroughly enjoyed this book and will most definitely be adding Ms. Caldwell as an author to watch, especially for future books in this series.
Many thanks to Berkley Books and to NetGalley for this ARC for review. This is my honest opinion.
ABOUT THE AUTHOR:

USA Today bestselling, RITA-nominated author Christi Caldwell blames authors Julie Garwood and Judith McNaught for luring her into the world of historical romance. When Christi was at the University of Connecticut, she began writing her own tales of love. She believes that most perfect heroes and heroines have imperfections, and she rather enjoys torturing her couples before crafting them a well-deserved happily ever after.
Christi lives in southern Connecticut, where she spends her time writing, chasing after her son, and taking care of her twin princesses-in-training.
web | facebook | twitter