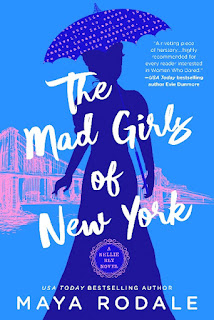 Title:   The Mad Girls of New York
Author:  Maya Rodale
Series:  Nellie Bly #1
Publisher:  Berkley Books
Genre:   Historical Fiction
Format:  Kindle ARC
No. of Pages:   336
Date of Publication: April 26, 2022
My Rating:   5 Stars
DESCRIPTION:
The year is 1887, and Nellie Bly is a young woman with a dream: to write for one of New York’s most respected newspapers. The editors on Newspaper Row are convinced that women are too emotional and delicate to report on the harshness of the city’s scandals—and Bly is on a mission to prove them wrong.
But how does a woman pave a path for herself in such a cut-throat and male-dominated industry? Nellie’s solution: by playing a part that only a woman can. Her pitch: she’ll go undercover as an admitted patient at Blackwell’s Island Insane Asylum for Women, a facility that has long been rumored to be a deplorable ruin where New York’s unwanted women are locked away and forgotten. Journalists are turned away at its doors. So it’s up to a female reporter who can play the part of a mad woman to expose the truth—and Nellie is just the woman to do it.
The New York World agrees to put Nellie’s acumen to the test. Nellie will have herself admitted, experience the horrors of Blackwell’s first-hand, and her editor will check her out of the facility in one week. But once inside, can she make it out and publish her findings before a (very attractive) rival journalist scoops her story?
Link to purchase the book
MY THOUGHTS:
When I started this incredible book by Maya Rodale, I immediately thought of the movie Frankie and Johnny.  I saw that movie over fifty years ago and I strongly remember the character Nellie Bly. Well, the Nellie Bly in this book is not the character from the movie. No, Nellie Bly was born Elizabeth Jane Cochran and Nellie Bly became her pen name.
The reason she chose a pen name is that it was not the thing for women to have either their name nor their photograph in a public newspaper. Nellie had been writing for a newspaper, but it was all fluff. Knowing she could offer much more in the field of journalism, she headed to New York, determined to get hired by a notable New York paper.
The time frame was The Gilded Age and it was a matter of course for women to be disregarded for many jobs during time period, yet many began to leave conventional roles. Nellie approaches an editor for a job, and at the same time there is a male reporter after the same job. She comes up with something major. She will get herself committed to an insane asylum called Blackwell's. The institution has a horrible reputation.
Blackwell's Island insane asylum was a place built in the 1830s and is often used as a warning to keep women in line. Women were known to disappear when it came to Blackwell's and the threats were taken quite seriously. Considering no woman leaves Blackwell's alive, Nellie is taking quite a risk.
Nonetheless, she lays a plan to get in but is unclear as to how she will get out. Her plan works and she is committed. Things are as bad as she had heard, even more so. Nellie endures the same brutal conditions as the 1,600 other women are experiencing. The only difference is that Nellie is planning on getting out in seven days.
The Mad Girls of New York is actually the first book in the Nellie Bly series. Since this is a fictional work based on true historical events, readers can look forward to reading more of Nellie Bly's exploits as she became a noted journalist. Please be sure to read the Author's Note at the end of the book. Maya Rodale did extensive research and offers other reading material for those interested in the life and exploits of Nellie Bly.
While this book was truly an exceptional read, it was difficult to read the passages about the horrid conditions that women were experiencing inside of Blackwell's walls. The author did a fabulous job making Nellie Bly come alive in the pages of this book.
Many thanks to Berkley Books and to NetGalley for this ARC for review. This is my honest opinion.
Please also see my YouTube video review -

Maya Rodale began reading romance novels in college at her mother’s insistence. She is now the bestselling and award winning author of numerous smart and sassy romance novels. A champion of the genre and its readers, she is also the author of the non-fiction book Dangerous Books For Girls: The Bad Reputation Of Romance Novels, Explained and a frequent contributor to NPR Books, The Huffington Post, Bustle and more. Maya lives in New York City with her darling dog and a rogue of her own.
web | instagram | pinterest | twitter |
facebook | youtube