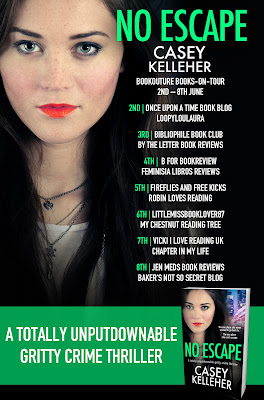 Today is my stop on the Blog Tour for No Escape by Casey Kelleher.

When she was just five years old, Lucy Murphy witnessed her mother’s brutal murder in their home on London’s notorious Griffin Estate. The case was never solved. Now a newly qualified police officer, Lucy has been given her first job: she’s going back to the Griffin Estate.

She is there to protect the estate’s vulnerable residents, including Shannon and Kian Winters, two kids struggling to deal with their alcoholic mother. Fifteen-year-old Shannon is working every spare hour to keep a roof over their heads, but thirteen-year-old Kian has fallen under the sway of gang leader Jax Priestly. And now Jax has plans for Shannon too…

As Lucy gets to know Kian and Shannon she becomes determined not to let the two teenagers become Jax’s victims. But time is running out. Jax is out of control, and the gang’s violent reprisals are escalating. Can Lucy face down her own demons in time to prevent a tragedy? As a child, she already witnessed the murder of one innocent person. It will take all her courage and training to stop another.

A shocking, fast-paced read that will keep you gripped from beginning to end. Fans of Kimberley Chambers and Martina Cole won’t be able to put this down. 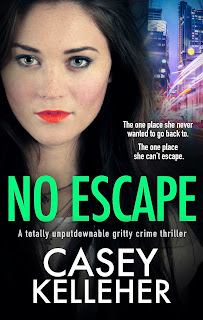 Lucy Murphy is now a police officer. Considering her incredibly traumatic past of witnessing her mother's brutal murder when she was just five years old, this was an amazing accomplishment for her. That crime was never solved, and try as she might, she just could never remember enough details of the killer's face to have the man brought to justice.

After her mother's murder, Lucy was taken away from her home at Griffen Estate by her grandmother. Now she is brought right back to the estate. Lucy gets involved with two teens, Shannon and Kian Winters. The teens are coping with their alcoholic mother and her enabling boyfriend. Although only fifteen years old, Shannon is shouldering most of the responsibility in keeping her family afloat. Meanwhile, 13-year-old Kian has fallen in with a bad crowd, and is now under the thumb of gang leader Jax Priestly.

While Lucy is doing her best to help Shannon and Kian, she is also dealing with her beloved grandmother who is suffering from dementia. She loves her grandmother dearly, and is struggling to take care of her despite the heartbreaking challenges. No Escape is a character-driven story where most of the characters easily touched my heart. Conversely, there are some unlikable people in this story, thus striking a fine balance.

This was a very well-written gangland thriller that kept me hoping for the best for Shannon and Kian, but especially for Lucy as I hoped she could gain closure from her mother's murder. The scenes were gritty and are often tinged with sadness. From the twists and turns to the riveting conclusion, this was a book I could not put down.

Born in Cuckfield, West Sussex, Casey Kelleher grew up as an avid reader and a huge fan of author Martina Cole.

Whilst working as a beauty therapist and bringing up her three children together with her husband, Casey penned her debut novel Rotten to the Core. Its success meant that she could give up her day job and concentrate on writing full time.

For all news and updates: