Today we are celebrating the release of the newest romantic suspense title from New York Times Bestselling Author Toni Anderson by participating in the blog tour! COLD WICKED LIES is a Cold Justice Crossfire novel and it is available now.

However, since Cold Wicked Lies is the third book in the series,

I read the first two books and their reviews are contained as part of this Blog Tour post. 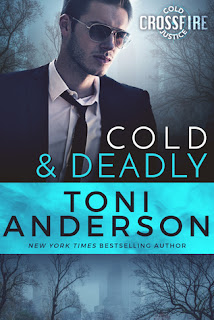 Hostage Negotiators can talk themselves out of anything—except falling in love.

FBI Supervisory Special Agent Dominic Sheridan is an accomplished expert in the Crisis Negotiation Unit. Practiced, professional, used to dealing with high-stake situations under tense conditions, Dominic is a master at manipulating people. Everyone, that is, but the headstrong rookie agent bent on destroying her fledgling career.

As a child, Ava Kanas put her life on the line when the mob executed her father. Now someone has killed her mentor, the man who inspired her to become an FBI agent—and she’s the only one who recognizes it was anything but a tragic accident.

When another agent is murdered and Dominic nearly dies, it becomes obvious a serial killer is targeting the FBI. Together Dominic and Ava search for clues in the investigation, all the while fighting a forbidden attraction that will complicate everything, especially when the predator sets their sights on Ava.

FBI Supervisory Special Agent Dominic Sheridan and rookie agent Ava Kanas are thrown together when agents begin dying and Dominic’s life is at stake. Ava has been assigned as his bodyguard after she almost lost her job. If she can keep him alive she just might hold onto her job.

Dominic is an expert negotiator in the Crisis Negotiation Unit, but falls short when it comes to stopping a maniacal killer. Ava has a lot to prove since she lost her father due a brutal murder and is also dealing with the death of her mentor. The pair don’t get along, except the sparks that fly between them soon spiral out of control.

Cold & Deadly introduces the Cold Justice: Crossfire series. The predecessor series, Cold Justice, is in my TBR, as I only have been able to read the first in the series so far, A Cold, Dark Place. I love how Toni Anderson uses federal agents in her series as they are just the types of shows I enjoy whenever I watch television.

There was a fairly equal mix of passion, intrigue and danger in this book. Both Ava and Dominic are greatly affected by former agent Van Santos’s death. This shared concern is a terrific catalyst in helping the pair work so closely together. At they get closer to the killer, they get even closer to each other. I truly loved Ava and Dominic together making this story an excellent read. I and am eager to read the next book in the series, Colder Than Sin. 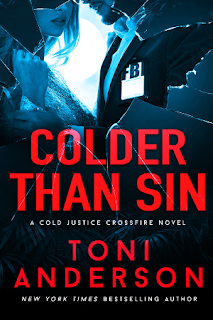 Top FBI negotiator Quentin Savage is hurled into his worst nightmare when a terrorist attack on a luxury hotel propels him from esteemed keynote speaker to powerless captive.

Haley Cramer is co-owner of a private security firm and prides herself on her independence, but she is shaken to the core when gunmen attack a conference she is attending. She survives, but only because Quentin Savage pretends she’s his wife.

Together Savage and Haley plot their escape from a ragtag army of brutal but efficient thugs while struggling to figure out exactly who the enemy is. Why was the conference attacked, and why was Quentin a specific target?

Trauma, danger and death chase FBI Negotiator Quentin Savage and Haley Cramer, co-owner of a private security firm, as they are in a fight for their lives. The danger of being on a volcanic island certainly doesn’t make things any easier for them. While the book and their time together starts off hot when it comes to Quentin and Haley, there is also something that is a clear stretch for me as a reader to have to read about. There is sexual assault and an extreme amount of violence in this book.

Beyond that, especially since this is the second book that I have read by Toni Anderson, I know going in that there is going to be a lot of action, sex and violence. Quinton proves to be the ideal hero in this book. He takes his responsibility to protect Haley very seriously and in her words, he lives up to his name Savage, which she will take any day when it comes to the fact that he is doing everything he can to keep her alive.

Both Quentin and Haley were fabulous in this story. Quentin because of his genius, strength and morality. The fact that as a widower, he doesn’t know if he can forget his wife. With Haley, her resilience and kindness shone through. Considering that Haley had been kidnapped and Quentin did everything he could to save her and keep her safe, despite the trauma that she experienced, it is no wonder that they had any chance at all when it came to considering whether they could have a future together.

Meanwhile, while they were on the run, someone else had been kidnapped, and that is a volcanologist named Darby O’Roarke. Her trauma was palpable and not only was she saved by both Quentin and Haley, she too showed remarkable strength.

The action and intensity, including the steamy sex scenes, are nonstop, clearly making this an easy one-sitting read. Although I only have the third book in the series, Cold Wicked Lies, for review, I am glad that I went ahead read this as well as the first book in the series Cold & Deadly. I really love continuity in this series serves it in spades.

Check out the purchase links for the book below. 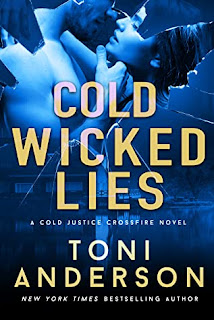 A young woman is found murdered on a remote mountainside, and top FBI Negotiator Charlotte Blood must go head-to-head with her stubborn, sexy, Hostage Rescue Team counterpart to unravel the mystery.

When blame falls on a secretive survivalist group, the stakes turn deadly…and Charlotte discovers that she’s the one tangled in COLD WICKED LIES.

Far less sexy than the first two installments, but equally as tense, Cold Wicked Lies brings two FBI agents from different teams together on a dangerous case. Charlotte Blood is a Supervisory Special Agent and negotiator and Payne Novak is a Hostage Rescue Leader. The pair are facing a very dangerous situation when they are called to a mountainside. The drama begins when Payne comes upon the body of a young woman's body. Gathering clues is imperative. Not only might there be others in danger, but the weather conditions are very bad.

Charlotte's and Novak's exceptional skills might be polar opposite but they both are very dedicated to their jobs. Working along with their current superior certainly is no easy task, but the trio must do what they can to solve a murder that leads to a militia group led by an apparently unstable leader is most definitely a challenge. The drama is extended when it comes to the leader and a secret that is only revealed during a shocking and thrilling conclusion.

All the while, Charlotte and Novak dance around the fact that they are drawn to one another. Danger only appears to make their attraction that much more intense. Will they manage to survive the dangers facing them - and the weather - long enough to explore what is happening?

As I mentioned at the beginning of this review, there wasn't a lot of time for hanky panky as was in the first two books in the series. However, the sexual tension was off the charts. That tension is only increased because they didn't like each other at the outset, so it was nice to see the transition in their feelings.

This was another terrific book in a very promising crossover series. It really makes me want to go back and read the Crossfire series in full, as I only had the opportunity to read the first one, A Cold Dark Place.

Many thanks to Toni Anderson and InkSlinger PR for this ARC for review. This is my honest opinion.

Originally from a small town in Shropshire, England, Toni studied Marine Biology at University of Liverpool (B.Sc.) and University of St. Andrews (Ph.D.) with the intention she'd never be far from the ocean. Well, that plan backfired and she ended up in the Canadian prairies with her biology professor husband, two kids, a rescue dog, and a laid-back leopard gecko.

Toni started writing while pregnant with her first child and never stopped. Her greatest achievements are mastering the Tokyo subway, climbing Ben Lomond, snorkeling the Great Barrier Reef, and surviving fifteen Winnipeg winters (fingers crossed). She loves to travel for research purposes and was lucky enough to visit the Strategic Information and Operations Center inside FBI Headquarters in Washington, D.C. in 2016. She also got to shove another (police) car off the road during pursuit training at the Writer’s Police Academy. Basically she has way too much fun!

For more information about Toni and her books, please visit her website: https://www.toniandersonauthor.com