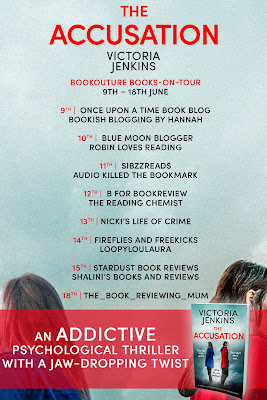 Today is my stop on the Blog Tour for The Accusation by Victoria Jenkins.

They say she’s guilty. She says she’s not. Who do you believe?

When Jenna hears the cry in the park one night, she feels she has no choice but to run and help. Cradling the injured woman in her arms, the attacker nowhere to be seen, all Jenna wants is to keep her alive until the ambulance arrives and for the ordeal to be over.

But the nightmare begins when the victim wakes up…

Jenna’s relief turns to horror when the finger is pointed at her. There must be some mistake: she’s never seen the woman before in her life, and Jenna tried to save her life. Why would she accuse Jenna of a crime she didn’t commit?

As the case against Jenna grows, her world starts to fall apart. Her teenage daughter is keeping secrets and her husband is growing more distant every day. To save her family and clear her name, Jenna has to prove she didn’t do it. But someone knows something Jenna did do. And they want to make her pay…

The Accusation is an addictive psychological thriller that asks how far you would go for justice. Perfect for fans of He Said/She Said, The Silent Patient and The Woman in the Window. 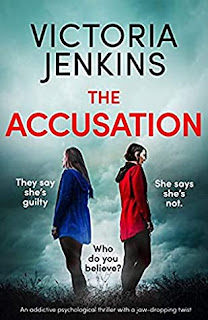 She was a good Samaritan. Walking home after an evening out with friends, Jenna decides to cut through a park, as it always saved several minutes on the walk headed to her home. Hearing the words "Help me!", Jenna runs towards the chilling words. Spotting a woman bleeding on the ground due to an apparent knife wound, Jenna does what comes naturally to her, and that is to render first aid and to call the emergency number. Eventually help arrives and the stranger is taken to the hospital and Jenna heads home.

That should have been the end of matters. However when the victim wakes up she points to Jenna as the person who tried to kill her. How can that be? The woman is a complete stranger to Jenna. To make matters worse, her daughter Lily is not being honest with her, and her relationship with her husband is becoming quite strained. The family problems are fracturing enough, but an attempted murder accusation is beyond imagination.

When I read a book by Victoria Jenkins I know that I am guaranteed a fast-paced read, one full of twists and turns, with drama and angst mixed in. That has been my previous experience and, true to form, The Accusation follows that pattern. This book does not miss a beat. To throw a wrench in the plan for this book, Jenna has her own secrets, thus we have an unreliable narrator. Written in first-person reveals more than one shocking thing about Jenna.

Jenna's home is topsy turvy, then with the accusation, and with her desperate attempts to prove that she is innocent, things completely spiral out of control. With her relationships being called into question, Jenna's past is slowly revealed as the story unfolds, all leading to a shocking conclusion. The Accusation was a thrilling ride from start to finish, and was impossible to put down. I cannot wait to read whatever else Victoria Jenkins has in store. 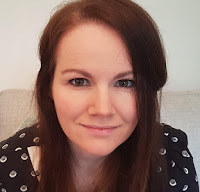 Victoria Jenkins lives with her husband and daughter in South Wales, where her series of crime novels featuring Detectives King and Lane is based. Her debut novel The Girls in the Water is an Amazon UK top 30 bestseller, and top 5 bestseller in the Amazon US chart.

Her first psychological thriller, The Divorce, was published in July 2019. The second, The Argument, was published December 10th 2019 and The Accusation publishes June 9th 2020.