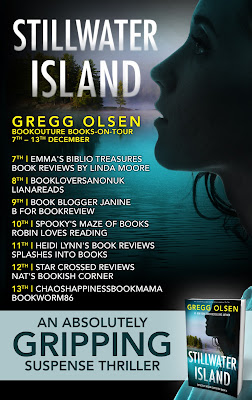 DESCRIPTION:
“Mommy, I’m scared.” Marlena’s precious boy lies with his little arm thrown over her thigh. It’s pitch-black, and she can hear seagulls. She realises they must be near water, and a new panic rises in her.

At 2 a.m. one icy winter morning, in the smart suburbs of Jefferson County, local father Ben Parker reports his wife Marlena and their little boy missing.

Rushing to the impressive family home, Detective Megan Carpenter finds the halls adorned with pictures of the beautiful, stay-at-home mom and their bright-eyed son. But that’s not all she finds…

A bottle of prenatal vitamins in the bathroom cabinet reveal that Marlena is pregnant. Why didn’t Ben mention this in his panicked call to the police?

Digging deeper into their seemingly perfect marriage, Megan’s fear begins to grow. The couple are separated, there’s talk of an affair, and the neighbors report loud fights. And then, Megan tracks a young woman believed to be Ben’s secret girlfriend, only to find her lifeless body in a secluded wood.

Ben’s watch lies in the undergrowth, and Megan’s team think she’s cracked the case, but she’s sure something’s not right. Ben’s family has wealth including a private island, and connections in high places. Is someone trying to block their investigation?

As Megan starts to wonder if the answer lies on the Parkers’ closely guarded island, just offshore, a shocking revelation makes her question everything. With a killer on the loose, can Megan find the missing pieces to the most complex case of her career and bring Marlena and her little boy home alive? Or will it be too late to save them?

A totally edge-of-your-seat mystery thriller that will have you racing to the end, from a number one, New York Times, Wall Street Journal and Amazon Charts bestselling author. Perfect for fans of Robert Dugoni, Michael Connelly and James Patterson. 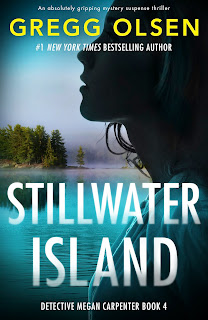 Title:   Stillwater Island
Author:  Gregg Olsen
Series:  Detective Megan Carpenter #4
Publisher:  Bookouture
Genre:   Mystery & Thrillers
Format:  Kindle ARC
No. of Pages:   360
Date of Publication:   December 7. 2021
My Rating:   4 Stars
Detective Megan Carpenter has kept her job despite a rather murky past. Often triggered by childhood memories, Megan still manages to fully invest herself into her latest case - that of missing mother Marlena and her little boy. Megan and her team were made aware of the disturbing situation by Marlena's husband Ben. Despite his apparently grave concern, per normal, he is the prime suspect until and if facts prove otherwise.
Megan is worried from the outset. For one thing, the child has asthma. Also, when going through their home, Megan spots prenatal vitamins. A sick child and a pregnant mother. Time is definitely of the essence.
The more Megan talks to Ben, the more she is sure of his guilt. How to prove it is another thing entirely. When it is discovered that Ben has not been living at home with is family, and in fact, has a girlfriend, Megan is even more sure of his guilt. Other disturbing facts start to be made clear along the way.
Stillwater Island is the exciting and equally thrilling fourth book in the Detective Megan Carpenter series. Megan is a complex character, and readers are often privy to her dark thoughts while she works her difficult cases. However, despite a rather difficult and impossible to forget past, Megan proves that she is worthy of being a detective and works hard at her job. I love her grit and her attitude. This book was definitely a page-turner and I was on tenterhooks from the very first page. I cannot wait for the next book in the series.
Many thanks to Bookouture and to NetGalley for this ARC for review. This is my honest opinion. 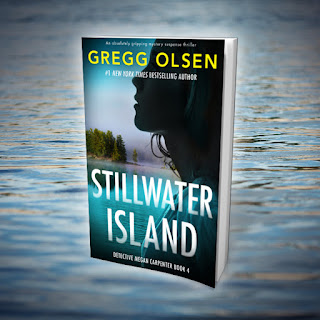 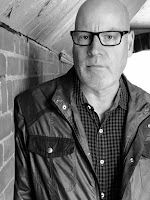 A #1 New York Times, Amazon Charts, Wall Street Journal and USA Today bestselling author, Gregg Olsen has written nine nonfiction books, seventeen novels, a novella, and contributed a short story to a collection edited by Lee Child.
The award-winning author has been a guest on dozens of national and local television shows, including educational programs for the History Channel, Learning Channel, and Discovery Channel.
The Deep Dark was named Idaho Book of the Year by the ILA and Starvation Heights was honoured by Washington's Secretary of State for the book's contribution to Washington state history and culture.
Olsen, a Seattle native, lives in Olalla, Washington with his wife, twin daughters, three chickens, Milo (an obedience school dropout cocker) and Suri (a mini dachshund so spoiled she wears a sweater).
Facebook: https://www.facebook.com/GreggOlsenAuthor?ref=ts
Twitter: https://twitter.com/Gregg_Olsen
Website: http://www.greggolsen.com
Instagram: https://www.instagram.com/greggolsen/
Goodreads: https://www.goodreads.com/author/show/15035.Gregg_Olsen