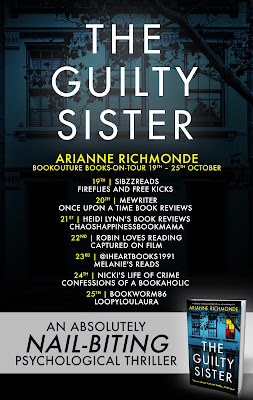 DESCRIPTION:
My sister is missing. And the police think I’m to blame.We haven’t always seen eye to eye, but I do love my sister Cece. She’s confident and free-spirited in a way I never am. And while she’s living her life to the full and posting it all over social media, I’m having early nights in my tiny New York apartment.
I didn’t mean to keep her a secret from my boyfriend, Bradley. But when he found out about her and I caught him scrolling through her pictures online, I knew I had to act before she ruined my life once again.When the police come knocking at my door, I instantly regret wishing Cece would leave my life for good.I didn’t want her to vanish forever, did I?If you enjoy gripping psychological thrillers like The Girl on the Train, Gone Girl and The Wife Between Us, you will love this totally addictive novel from a USA Today bestselling author.
BUY LINKS:
Amazon: https://geni.us/B09DDCWFVNcover
Apple: http://ow.ly/FMEZ50FWTZR
Kobo: http://ow.ly/a78W50FWTYK
Google: http://ow.ly/v4gG50FWU2A 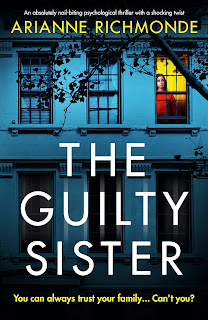 Title:   The Guilty Sister
Author:  Arianne Richmonde
Publisher:  Bookouture
Genre:   Psychological Thriller
Format:  Kindle ARC
No. of Pages:   261
Date of Publication:   October 19, 2021
My Rating:   4 Stars
Sara and Cece have a contentious relationship, but Sara does love her sister. Although identical twins, their personalities could not be more different. However, when Cece goes missing Sara wonders if wishing Cece would disappear was her fault. When Sara's boyfriend Bradley finds Cece's social media account on Sara's phone, Sara knows she has some explaining to do.
Sara has been hiding a secret for years, but at least one person knows her secret. However, she is not the only one with secrets, secrets that are threatening to be revealed. Bradley's previous relationships apparently have a murky past. Of the two of them, things will eventually come to a head.
For now, Bradley does not intend on leaving Sara's difficult relationship with Cece alone. He found the pictures. Now he wants answers. Wants more, in fact. Will Bradley get more than he bargained for? What of Sara, will she be able to strike a balance with the things she has been hiding, especially after the police come knocking at her door?
Well, this story was one I did not expect. To say it was shocking would be a vast understatement. What crafty, intelligent writing Arianne Richmonde has displayed in this thrilling story of deception. Clues were dropped throughout this clever story, but I still never would have guessed the turn of events. Things played out in marvelous fashion. Very, very clever. Five stars to be sure!
Many thanks to Bookouture and to NetGalley for this ARC for review. This is my honest opinion. 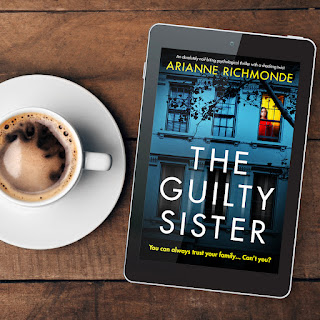 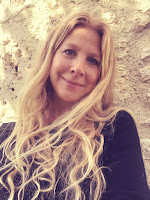 Arianne Richmonde is a half British, half American, USA TODAY bestselling author, who lives in France with her husband and four-legged family. Surrounded by vineyards and sunflower fields in an old stone farmhouse they restored, she fills her days creating twisty novels full of suspense and intrigue. When she isn’t writing she loves to travel, especially to warm, exotic countries, all in the name of research. She used to be an actress so likes nothing more than to immerse herself in the minds and lives of her characters.