BLOG TOUR - Find Me in the Dark 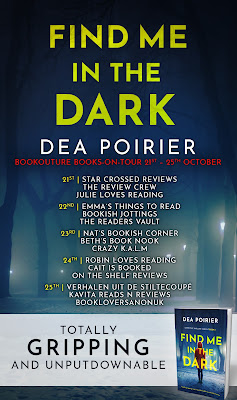 She’d been running for so long, it felt like her legs were on fire. Her heart was pounding so hard, she was sure it would give out. Around her, the snow was falling, casting an eerie silence over the town. A crack behind her, a foot snapping a branch, it warned her that he was still coming. She whipped around and saw the knife gleaming in his hand…

As the snow begins to melt across Plattsburgh, New York, the body of a young woman is found buried in a snowbank. When Detective Harlow Durant arrives at the scene she discovers that the victim has lain there for months: her arresting beauty, brightly-coloured nails and a distinctive gold bracelet perfectly preserved in the ice.

Searching missing person reports, Harlow soon identifies the victim as college student Alyssa Trent. Her grieving family describe her as someone who had no enemies and was a dedicated student. But Alyssa’s tutor has a different view: they claim Alyssa had another life that she kept hidden. But who would want her dead?

Harlow knows all about secret lives. She has spent years running from her past and from her father, a convicted serial killer. As the only female detective at the Bureau of Criminal Investigation, Harlow has vowed to bring killers to justice. Now she needs to find justice for Alyssa.

When another female student is found in the thawing snow, Harlow knows that she is hunting a twisted killer. The victims knew each other but what dark secret connects them? With the small-town reeling in shock and more snow coming, Harlow knows she needs to stop a killer dead in their tracks before another innocent life is lost.

From the bestselling author of Next Girl To Die comes an addictive crime thriller perfect for fans of Melinda Leigh, Kendra Elliot and Robert Dugoni’s Tracy Crosswhite series. 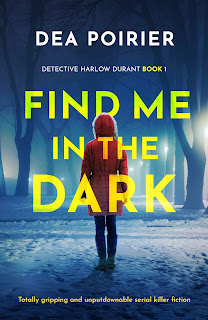 Title:   Find Me in the Dark
Author:  Dea Poirier
Series:  Detective Harlow Durant Book #1
Publisher:  Bookouture
Genre:   Mystery & Thrillers
Format:  Kindle and Audiobook ARC
Narrator:  Lisa Rost-Welling
No. of Pages:   300
Date of Publication:   October 21, 2021
My Rating:   4 Stars
As Detective Harlow Durant is working on her newest case, that of a young woman's body found lying in the snow, she discovered some interesting facts. Not only was it clear that the woman had been there for quite some time, facts proved that the woman had been living a secret life. On the one hand she was a hard-working student, someone who got along with everyone. On the other hand, her tutor says the victim was a different woman than others saw.
Leading a secret life is something that is not new to Harlow. As her father is currently imprisoned as a convicted serial killer, Harlow herself kept a lot hidden. As she pushes through the current investigation, she remembers snippets of her past, and the story goes between past and present. Then, another student is found and Harlow is certain that there is a connection between the two women. Can Harlow find the killer before there is another victim? And, how much of Harlow's past impacts what is going on in her life now?
What a riveting story! Whether sensing the danger the victims were about to face or reading of Harlow's violent past, the impact was huge. Chilling. It helped that Harlow has a wonderful new partner named Lucas Park and it was interesting to watch them strike a balance in their new working relationship. What made this already fabulous book even better was the excellent audiobook narration. I could not put this book down, leaving me excited for this first book in a new series. I love Harlow and cannot wait to see her face future cases.
Many thanks to Bookouture and to NetGalley for this ARC for review. This is my honest opinion.
ABOUT THE AUTHOR: 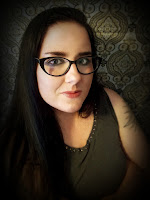 Author Dea (D.H) Poirier is the author of NEXT GIRL TO DIE, which hit #1 in the Amazon charts. She was raised in Edmond, Oklahoma, where she got her start writing in creative writing courses. She attended The University of Central Oklahoma for Computer Science and Political Science. Later, she spent time living on both coasts, and traveling the United States, before finally putting down roots in Central Florida. She now resides somewhere between Disney and the swamp. She spends her days at her day job as a President of Digital Marketing, and her nights writing manuscripts.
https://www.dhpoirier.com/
https://www.facebook.com/dhpoirier/
https://www.instagram.com/deapoirier/
https://twitter.com/deapoirierbooks