She’d brought him his greatest joy.

Now he must save her life…

Rancher Kara Holland’s hot on the trail of a murderer who’s been killing surrogates—like she was for her ill sister. But when Kara’s trap goes terribly wrong, she’s thrust headlong into the killer’s crosshairs…along with her sister’s widower, Deputy Daniel Logan. And as she and Daniel stay one frantic step ahead of a deadly foe, the sparks igniting between them rival the danger they face.

Add Safeguarding the Surrogate to your Goodreads! 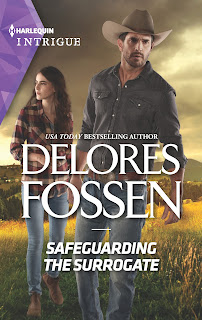 Title:   Safeguarding the Surrogate
Author:  Delores Fossen
Series:  Mercy Ridge Lawman #2
Publisher:  Harlequin Intrigue
Genre:   Romantic Suspense
Format:  Kindle ARC
No. of Pages:   171
Date of Publication:   June 29, 2021
My Rating:   4 Stars
Kara Holland is determined to find out what is happening to surrogates. In fact, two surrogate mothers have recently been murdered. Kara has a sensitive relationship with her brother-in-law Deputy Daniel Logan. Kara had become a surrogate for Daniel and her sister Maryanne. Kara and Daniel lost Maryanne after her battle with breast cancer. Sadly, Maryanne's situation was just terrible, and she died four months before Kara gave birth to Sadie. Maryanne desperately wanted to be a mother, but she never got the chance.
Kara has no doubt that the recent murders had something to do with a local fertility clinic, and that is the very clinic she used so that she could carry Daniel and Maryanne's baby. Kara wants answers. Daniel wants her to drop it. However, she refuses and before long Daniel is right beside Kara while she searches for the truth about what happened to the two women.
Kara is most certainly onto something. In fact, she has attracted the attention of a dangerous killer. Not only does Kara wants answers, her father Eldon Stroud hasn't accepted Maryanne's death. Another person to consider, and that is Kara's ex-boyfriend, Sean Maynard. His growing jealousy over the time Kara and Daniel are suddenly spending together is more than apparent. Then there is a rancher who is tied to a militia group. Could one of these three men be responsible for the murders and for the danger facing Kara and Daniel?
The deeper Kara and Daniel dig, the more they unearth. Meanwhile, they both have to contend with growing feelings, something that never would have happened if Maryanne hadn't passed away. Then there is the fact that Kara loves baby Sadie with every fiber of her being. If they can survive the unending threats, is there a chance that Kara, Daniel and Sadie could become a family? What about the surrogacy program? Can that thrive despite the current dangers?
Safeguarding the Surrogate might be a quick read, but it is full of action, danger and romance. For a quick one-sitting read, certain to capture the attention of any lover of romantic suspense, then this is the book to read. Although it is the second book in the Mercy Ridge Lawmen series, it would do quite well as a stand-alone. However, for an equally enjoyable story, I definitely recommend the first book in the series, Her Child To Protect.
Many thanks to Harlequin Intrigue and to NetGalley for this ARC for review. This is my honest opinion.
Please enjoy the following excerpt:

USA Today bestselling author, Delores Fossen, has sold over 70 novels with millions of copies of her books in print worldwide. She's received the Booksellers' Best Award, the Romantic Times Reviewers' Choice Award and was a finalist for the prestigious Rita ®. In addition, she's had nearly a hundred short stories and articles published in national magazines. You can contact the author through her webpage at www.deloresfossen.com.