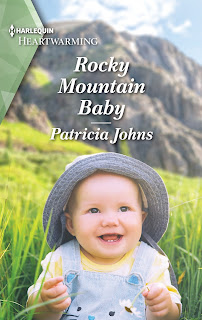 Will turn their lives upside down!

Taryn Cook is pregnant with her own miracle baby, and she’s perfectly happy to be a single mom. Then she’s reunited with the baby’s father, Noah Brooks, at her new job in Mountain Springs. Noah never planned on being a dad, but he’s determined to be there for his son…and Taryn—even if that means being just a friend to the woman he’s falling for.

Buy Rocky Mountain Baby by Patricia Johns
Harlequin.com | Amazon | Barnes & Noble
Apple Books |  Google Play Kobo
MY THOUGHTS:
Taryn Cook was certain she'd never have a child. However, she is pregnant. And she is alone. However, she is so happy to be pregnant that she is fully prepared to raise her child alone. However, when she runs into the baby's father at a consulting job for her business, Noah Brooks, her carefully laid plans fall apart. She never expected to see Noah after their night together. In fact, the night that brought them together perfectly illustrates that they were each at crossroads in their lives and now that are working together they both have to rethink their futures.
Rocky Mountain Baby is the third book in the Second Chance Club series. Although it did perfectly well as a standalone for me, the story was just so sweet and had such an emotional edge, that I plan on reading the first two books in the series, Their Mountain Reunion and Mountain Mistletoe Christmas. What I found in this story is the strong connection between Taryn and Noah, but also the members of the town.
In addition to that, Taryn and Noah had to deal with their emotional baggage, especially since the the two of them had never expected to meet again. Would it be possible for them to parent together, for them to learn to love and trust one another, especially knowing that sexual attraction wouldn't be enough to sustain a life together?
This touching story evolved quite nicely while Taryn and Noah's relationship developed, especially while their lives eventually began to change. I loved how the happily ever after was delivered, especially with the conflicts concerned.
Many thanks to Harlequin Heartwarming and to NetGalley for this ARC for review. This is my honest opinion.

Please enjoy the following excerpt:
ABOUT THE AUTHOR:

Patricia Johns writes from Alberta, Canada where she lives with her husband and son. She has her Honors BA in English Literature and writes for both Harlequin and Kensington books. She loves prairie skies and time with her family.