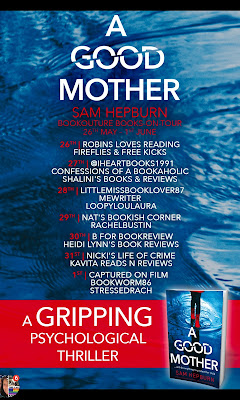 I see my son’s scooter lying in the undergrowth. Time stands still. Where is he? Deafened by my own heartbeat, I keep looking but I can’t see him. This is all my fault. My punishment for the things I did, and the things I should have done.

All I ever wanted was to keep my son safe. I married the perfect husband, built the perfect home. I’ve tried to give Finn the life I never had.

Everything was going so well. Until now.

It’s just small things at first – a punctured tyre, an open gate that I'm sure I locked. But then I see the photograph of two young girls, and a night I’ve tried to forget.

I know I have to stop pretending that nothing is happening. I can’t escape the truth.

Someone knows my secret. But what do they want from me?

A gripping and suspenseful thriller with a jaw-dropping twist, fans of Friend Request, The Wife Between Us and The Girl on the Train won’t be able to put this down. 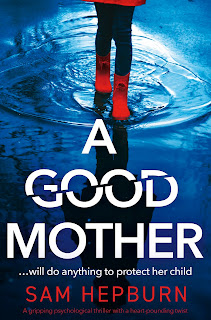 Title:   A Good Mother
Author:  Sam Hepburn
Publisher:  Bookouture
Genre:   Psychological Thriller
Format:  Kindle ARC
No. of Pages:   343
Date of Publication:   May 26, 2021
My Rating:   4 Stars
Nicola might seem to be in an ideal marriage. Married to a successful dentist, Ian. A mother of a young son named Finn. But, before I go on, I must say that this book might trigger some readers. In all honesty, it triggered me. Ian was a controlling husband. I cringed at his level of control. Page after page kept me with a lump in my throat, and I considered putting this book down.
But, no, I kept on reading. I looked more at Nicci. I needed to see if she could fight back. For herself. For Finn. What ensued was a dramatic story of how she became married to Ian and some backstory about her less than ideal life, one spent in care after her mother's suicide. As a young mother she met Ian. However, before that, in the years in foster care, she befriended another girl named Donna.
Donna is in Nicci's past. Or had been. What brings her into the story as it unfolded?  Well, as I mentioned, drama. Not only do we see the disturbing relationship between Nicci and Ian, we see Donna come back into the picture. When Donna returns what she presents to Nicci is something very ugly. The twists in this book come fast and hard and most certainly kept me riveted to the story, although some of the twists were rather shocking.
Not only is Nicci consistently gaslighted by Ian, other strange things begin happening to her, proof that someone is watching her, that she might indeed be threatened. All of this, what is happening between her and Ian, as well as what is happening now is due to the fact that Nicci has been hiding a secret for years. Secrets, however, have a way of being exposed. How that happens in this story is up to the reader. Get past the domestic abuse and what Sam Hepburn has delivered to readers is definitely a page-turner, one that led me to just having to know the outcome.
Many thanks to Bookouture and to NetGalley for this ARC for review. This is my honest opinion.
ABOUT THE AUTHOR:

Sam Hepburn read modern languages at Cambridge University and, after a brief spell in advertising, joined the BBC as a General Trainee. She worked as a documentary maker for twenty years and was one of the commissioners for the launch of BBC Four. Since then, she has written several books, including psychological thrillers Gone Before and Her Perfect Life, and novels for young adults and children. She won the 2017 CWA Margery Allingham Short Story award and has been nominated for several other prestigious prizes, including the CILIP Carnegie Medal for her YA thrillers.

Sam has worked and travelled widely in Africa and the Middle East, and is a trustee of the Kenyan’s children’s charity, I Afrika. She now lives in London with her husband and children.