A gripping page turner about two young mothers, one grisly murder, and the lengths both women will go in the name of their children.

When young decorated combat veteran Travis Hollis is found stabbed through the heart at a U.S. Army base in Germany, there is no doubt that his wife, Luz, is to blame. But was it an act of self defense? A frenzied attempt to save her infant daughter from domestic abuse? Or the cold blood murder of an innocent man?

As the case heads to trial in Los Angeles, hard-charging attorney Abby Rosenberg is eager to return from maternity leave—and her quickly fracturing home life—to take the case and defend Luz. Abby, a new mother herself, is committed to ensuring Luz avoids prison and retains custody of her daughter. But as the evidence stacks up against Luz, Abby realizes the task proves far more difficult than she suspected – especially when she has to battle for control over the case with her co-counsel, whose dark absorption with Luz only complicates matters further.

As the trial careens toward an outcome no one expects, readers will find themselves in the seat of the jurors, forced to answer the question - what does it mean to be a good mother? A good lawyer? And who is the real monster? 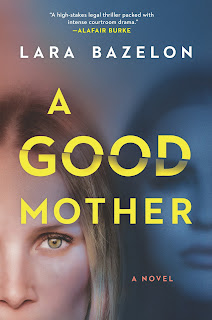 Title:   A Good Mother
Author:  Lara Bazelon
Publisher:  Hanover Square Press
Genre:   Mystery/Thriller
Format:  Kindle ARC
No. of Pages:   368
Date of Publication:   May 11, 2021
My Rating:   4 Stars
Luz killed her husband. Of that there is no doubt. She called the police herself and was found cradling his dying body. She maintains that she had no choice. Either it was self defense or him or their infant daughter. Or both. In either case, she killed him.
Abby is a public defender on maternity leave. However, she not only barrels through every obstacle in her path to take the case, she is determined to win right from the start - and all bets are off. In ways that could easily be called unethical, she begins a path of making it so that Luz stays out of prison and with her infant daughter. Part of Abby's reason for fighting for Luz is that they are both young mothers. Is that bond enough for Abby to sweep clear facts under the rug, even niggling doubts of Luz's innocence?
This story definitely would qualify as having unreliable narrators. It doesn't matter whether the reader is considering Luz and her story, and Abby and her methods. In either case, both women prove distasteful almost from the very beginning. However, this is a courtroom drama and that in itself was rather intriguing. But it was more than that. Abby's relationship with the father of her baby is also pivotal as to how this story moves. As a mother, I don't know if I could have left my very young child to spend unending hours, days and weeks defending someone that I didn't even trust, and at great cost. Watching that drama in Abby's personal life unfold was just as interesting as watching Abby desperately try and get Luz a verdict of innocence.
While I did remain intrigued while reading this courtroom thriller, especially as it unfolded as disturbing facts were revealed, the ending definitely shocked me. As a reader not all that familiar with the legal system, watching Abby and others in the course of this story really shook my faith in a system that is part of the fabric and foundation of this uncertain world in which we live.
Many thanks to Hanover Square Press and to NetGalley for this ARC for review. This is my honest opinion.
Please enjoy the following excerpt:
ABOUT THE AUTHOR:

Lara Bazelon is an attorney, journalist, MacDowell Fellow, former public defender, and professor at the University of San Francisco School of Law, where she holds the Phillip and Muriel C. Barnett Chair in Trial Advocacy. She is also the author of Rectify: The Power of Restorative Justice After Wrongful Conviction, as well as the upcoming nonfiction book, Ambitious Like a Mother: Women, Ambition, and Motherhood, and her writing has been published widely in The New York Times, The Atlantic, Slate, The Washington Post, and many others.