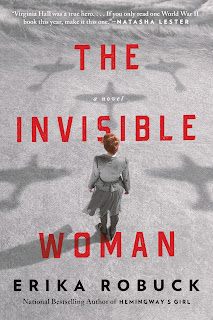 Title:   The Invisible Woman
Author:  Erika Robuck
Publisher:  Berkley Books
Genre:   Historical Fiction
Format:  Kindle ARC
No. of Pages:   368
Date of Publication:   February 9, 2021
My Rating:   5 Stars
DESCRIPTION:
Based on the remarkable true story of an American woman who defied the odds to become the most dangerous Allied spy in France during World War II, comes a gripping historical novel about strength, humanity, and bravery from the bestselling author of Hemingway's Girl.
March 1944. Virginia Hall wasn't like the other young society women back home in Baltimore--she never wanted the debutante ball or silk gloves. Instead, she traded a safe life for adventure in Europe, and when her beloved second home is thrust into the dark days of war, she leaps in headfirst.
Once she's recruited as an Allied spy, subverting the Nazis becomes her calling. But even the most cunning agent can be bested, and in wartime trusting the wrong person can prove fatal. Virginia is haunted every day by the betrayal that ravaged her first operation, and will do everything in her power to avenge the brave people she lost.
While her future is anything but certain, this time more than ever Virginia knows that failure is not an option. Especially when she discovers what--and whom--she's truly protecting.
Link to purchase the book
MY THOUGHTS:
One thing I have learned about reading historical fiction. That is I learn about situations and people that I never once heard about while in school. In the case of this book, The Invisible Woman, I am honored to have met Viginia Hall Goillot. How one of America's most important spies during World War II has only just become to be recognized is difficult to believe. To jump ahead in her career years after the war, she became an agent for the CIA and she is recognized in their annals, but not so for the general public.
Who was Virginia Hall and how did she become a fearless spy at a time hiding would have been a better option? Actually, she was an American, safe from Hitler and his annihilation of millions. A bit more about Virginia. In a hunting accident, she shot off her foot. So, how did an American woman, at a time when prosthetic devices were still rather crude, end up working vigorously with the French Resistance?
Virginia was a brilliant woman who went to two colleges and became quite adept at language. Eventually she went to study in Paris and chose to become a diplomat. It was rare for a woman to become a diplomat at that time and her application for the job was rejected time and again. Then World War II broke out and the Nazis invaded France. Although Virginia was forced to flee France, and ended up in Britain, she met a spy and her life forever changed. Posing as a reporter, Virginia took on many different appearances and worked with a network that fought against the Nazi regime. This job was incredibly dangerous and many agents lost their lives.
The Nazis were onto her and tried to capture her. The danger she faced never once let up. Safe houses along the way, along with many loyal people, kept her alive. Virginia kept working towards the goal of D Day. She knew if that day were ever to happen, then Hitler and his cronies could finally be put to a stop.
What an incredible story! Not only did I inhale this book by Erika Robuck, but I read whatever I could find about this amazing woman. There are other books being produced and even a feature film is being planned. I will be there for all of it. This is the kind of history that keeps me coming back to historical fiction.
What makes this work of fiction work for me is the fact that the author did exhaustive research in order to pen this story. Quite naturally literary license had to be taken, but the book was written with intelligence and integrity. I feel the readers are getting a very good story with this book and it most certainly comes highly recommended from me. Reading the Afterword in this book gave me great appreciation for all of the effort that was put into writing such an well-written story.

Erika Robuck is the national bestselling author of Receive Me Falling, Hemingway's Girl, Call Me Zelda, Fallen Beauty, and The House of Hawthorne. She is a contributor to the anthology Grand Central: Original Stories of Postwar Love and Reunion and to the Writer's Digest essay collection Author in Progress. Robuck lives in Annapolis, Maryland, with her husband and three sons.
web | twitter
Page 2 of 2 Page 1 of 2