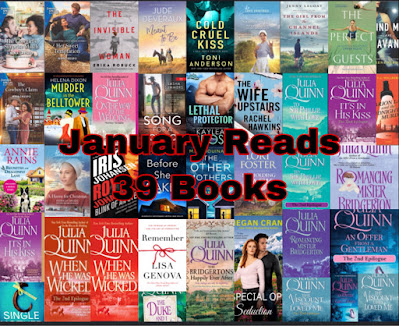 For a moment, however, let's talk about how the year ended, since I never did an update for November, December, or even wrapped up 2021. 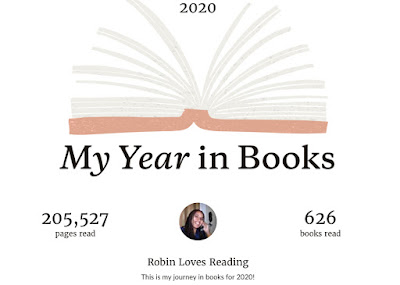 I had some very difficult situations assail me during the last two months of 2020. I did read, 23 books in November and 13 in December, but nowhere close the caliber I had gotten accustomed to. This is in large part why I did not do monthly updates during the end of the year, or the year end update.

I set my Goodreads goal the same as last year:

According to Goodreads, I am four books behind. I am going to keep this goal, however, as I think I got my reading groove back and look forward to the huge TBR I have ahead of me. I have chosen a lot of books for blog tours, some excellent NetGalley ARCs, and several series that I plan on reading this year.
These are the books that I read in January:

The dates read and ratings are as follows:
The Cowgirl's Surprise Match 1/31 ⭐️⭐️⭐️⭐️
Her Sweet Temptation 1/29 ⭐️⭐️⭐️⭐️
The Cowboy's Claim 1/29 ⭐️⭐️⭐️⭐️
The Invisible Woman 1/28 🌟🌟🌟🌟🌟
Murder in the Belltower 1/28 ⭐️⭐️⭐️⭐️
Reunited on Dragonfly Lane 1/27 ⭐️⭐️⭐️⭐️
Meant to Be 1/26 🌟🌟🌟🌟🌟
A Haven for Christmas 1/25 🌟🌟🌟🌟🌟
Cold Cruel Kiss 1/24 ⭐️⭐️⭐️⭐️
Song for a Cowboy 1/24 ⭐️⭐️⭐️⭐️
Blink of an Eye 1/23 ⭐️⭐️⭐️⭐️
Someone to Trust 1/22 🌟🌟🌟🌟🌟
The Girl from the Channel Islands 1/21 🌟🌟🌟🌟🌟
Lethal Protector 1/20 ⭐️⭐️⭐️⭐️
The Wife Upstairs 1/20 ⭐️⭐️⭐️⭐️
Before She Wakes 1/19 ⭐️⭐️⭐️⭐️
The Other Mothers 1/18 ⭐️⭐️⭐️⭐️
Remember: The Science of Memory and the Art of Forgetting 1/17 🌟🌟🌟🌟🌟
The Perfect Guests 1/16 ⭐️⭐️⭐️⭐️
No Holding Back 1/15 🌟🌟🌟🌟🌟
The Bridgertons: Happily Ever After 1/13 🌟🌟🌟🌟🌟
On the Way to the Wedding 1/13 ⭐️⭐️⭐️⭐️
It's in His Kiss 1/12 ⭐️⭐️⭐️⭐️
It's in His Kiss: The 2nd Epilogue 1/12 ⭐️⭐️⭐️⭐️
When He Was Wicked 1/11 ⭐️⭐️⭐️⭐️
When He Was Wicked: The 2nd Epilogue 1/11 ⭐️⭐️⭐️⭐️
To Sir Phillip, With Love 1/10 ⭐️⭐️⭐️⭐️
Special Ops Seduction 1/10 ⭐️⭐️⭐️⭐️
To Sir Phillip, With Love: The 2nd Epilogue 1/10 ⭐️⭐️⭐️⭐️
Romancing Mr Bridgerton 1/9 🌟🌟🌟🌟🌟
Romancing Mister Bridgerton: The 2nd Epilogue 1/9 🌟🌟🌟🌟🌟
An Offer From A Gentleman: The 2nd Epilogue 🌟🌟🌟🌟🌟 1/9
An Offer From a Gentleman 🌟🌟🌟🌟🌟 1/9
The Viscount Who Loved Me: The 2nd Epilogue 🌟🌟🌟🌟🌟 1/6
The Viscount Who Loved Me 🌟🌟🌟🌟🌟 1/6
Find Me in Havana ⭐️⭐️⭐️⭐️ 1/5
Marion Lane and the Midnight Murder ⭐️⭐️⭐️⭐️ 1/5
Single Mother ⭐️⭐️⭐️⭐️ 1/4
The Duke and I: The Epilogue II 1/3 🌟🌟🌟🌟🌟
Each book cover above and also each title are clickable to Goodreads should you want to look at any of the titles I have read.
As the month began, I devoured the entire Bridgerton series by Julia Quinn after binge watching the Netflix television series.  Not only did I read each book in the series, but I read each of the second epilogues and the series summary, The Bridgertons: Happily Ever After. This was a wonderful way for me to end the reading funk I had sunk into.
My favorite reads this month starts off with the nonfiction book, Remember by Lisa Genova. This is a fabulous exploration of how we remember, why we forget, tips on improving our memory and a brief discussion about Alzheimer's disease. I loved starting a new series by Lori Foster with No Holding Back, the first book in her new McKenzies of Ridge Trails series. Ms. Foster is one of my favorite authors and having read dozens upon dozens of her books, I was very keen to read this book and was not disappointed.
I read a couple of historical fiction books already and was quite impressed. The first was The Invisible Woman by Erika Robuck. This remarkable book was about a female spy who overcame the fact that she lost part of her leg, but proved incredibly heroic during World War II. Her name was Virginia Hall, an American who went to France and joined the resistance. She took on the most dangerous operations and fought tooth and nail until and after D-Day. I did research her and discovered that she never slowed down and even joined the CIA after the war.
The other historical fiction book that I devoured was The Girl from the Channel Islands by Jenny Lecoat. This was a touching and often heartbreaking story of a Jewish girl in love with a German soldier. She pretty much had to hide in plain sight in order to survive during those difficult days of the war. Whether or not their forbidden love would survive was definitely worth reading and this book kept my attention from beginning to end.
Another favorite read for me in January was Meant to Be by Jude Devereaux. This book won't be released until March 16, but I had to read it early because my friend could not stop talking about it. Boy was she right! This book showed us that we cannot always accept things at face value or always live up to perceived expectations. This was a delightful read and is a book that spanned generations. I was truly drawn to this book and it ended up bringing me to tears.
Every month I try and read a couple of Amish fiction books, which I find to be plentiful. The two I read in January were A Haven for Christmas and Someone to Trust by Patricia Davids. They were the 4th and 5th books in the heartwarming North Country Amish series. These books hold a special place in my heart and I am glad to have been able to read these two.
Most of these reads in January got either four or five stars from me. It was a terrific reading month and, like I already said, ended the reading drought that I was falling into.
My February so far. Now, I am using this week to do a lot of catching up on this blog and filming and uploading videos, so my reading is a bit slow. Here is also my upcoming TBR, which no doubt will change quite frequently week by week.
February
Monthly # pages: 1,419
Books read this month: 4
Running total # pages: 11,969
Running total # books read: 43

So, that is my wrapup and what I hope to dive into this month.

Email ThisBlogThis!Share to TwitterShare to FacebookShare to Pinterest
Labels: MONTHLY WRAP UP