Review - The Girl at the Back of the Bus 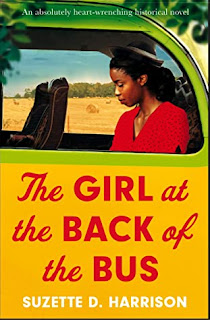 Title:   The Girl at the Back of the Bus
Author:  Suzette D. Harrison
Publisher:  Bookouture
Genre:   Historical Fiction
Format:  Kindle ARC
No. of Pages:   310
Date of Publication:   February 8, 2021
My Rating:   5 Stars
DESCRIPTION:
I watched in awe as Miz Rosa stopped those men on the bus with her clear, calm “no” and I thought about that word. What if I said no? What if I refused to follow the path these White folks wanted for us? What if I kept this precious baby?

On a cold December evening, Mattie Banks packs a suitcase and leaves her family home. Sixteen years old and pregnant, she has already made the mistake that will ruin her life and disgrace her widowed mother. Boarding the 2857 bus, she sits with her case on her lap, hoping that the driver will take her away from disaster. Instead, Mattie witnesses an act of bravery by a woman named Rosa Parks that changes everything. But as Mattie strives to turn her life around, the dangers that first led her to run are never far away. Forging a new life in a harsh world at constant risk of exposure, Mattie will need to fight to keep her baby safe.

Ashlee Turner is going home. Her relationship in ruins, her career held back by prejudice, she is returning to the family who have always been her rock. But Ashlee’s home is not the safe haven she remembers. Her beloved grandmother is dying and is determined to share her story before she leaves…

When Ashlee finds a stack of yellowing letters hidden in her nana’s closet, she can’t help the curiosity that compels her to read, and she uncovers an old secret that could wreak havoc on her already grieving family. As she tries to make sense of what she has learned, Ashlee faces a devastating choice: to protect her loved ones from the revelations, or honor her grandmother’s wishes and follow the path to the truth, no matter where it may lead.

For readers of The Help, Orphan Train and Before We Were Yours comes a beautiful and heartbreaking novel about redemption, family secrets and the spirit of survival found at the hardest time.
Link to purchase the book
MY THOUGHTS:
"Miz" Rosa Parks touched the lives of many people over the decades. A wonderful wife, already showing strength while living at a time when civil rights was being fought for, she unknowingly touched the life of sixteen-year-old Mattie Banks. It was 1955 and Mattie's life was in great turmoil and one bad decision was about to lead to an even worse one. When Mattie witnessed Rosa Parks’ dignity, strength and determination, she was so impressed that she didn't follow through on what would have been a fateful decision.
Before I go on about Mattie, we also meet Ashlee Turner, visiting and caring for her dying grandmother. The story shifts between Mattie and Ashlee and readers see how they were connected on basic and then very serious levels. Both stories were incredibly touching.
Back to Mattie. She got pregnant at sixteen and her life became uprooted. However, due to the bravery she witnessed on that bus ride, she was able to draw even closer to her mother and her life became incredibly remarkable. The strength of this young woman was beyond touching. The way she turned her life around, despite challenges many would have found insurmountable, was utterly incredible.
In present day, Ashlee's life is also in turmoil. Her beloved grandmother is dying, her relationship is on the rocks and her career as a lawyer is not bringing her the joy and fulfillment she imagined. As she and her parents care for her grandmother, Ashlee discovers hidden letters from decades ago. It is these very letters that tie her closer to her grandmother than she ever imagined. All the while, Ashlee's relationship is going through changes that will have a lasting impact on her future.
While this story began with Mattie on that monumental bus ride and witnessing what happened to Rosa Parks, the story evolves into the touching story of two strong women and how Mattie's experiences go a long way into bringing great change into Ashlee's life. I loved the drama, the warmth, the strength and the message that this book delivered. While Suzette D. Harrison may be a new name for me as an author, I will be front and center for whatever else she has in store for her readers. 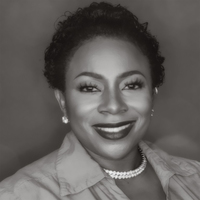 “I grew up in a home where reading was not requested, it was required.”
The American poet and author Harrison grew up in California. Her first literary success stems from her high school years, in which she was praised for her poetry. Among her inspirations she has cited authors Toni Morrison and Maya Angelou. Harrison is an author of different genres, including children's books, romance and women's fiction. But most of all she likes to write African American historical fiction.