Today is my stop on the Blog Tour for First Cut by Judy Melinek and T.J. Mitchell. 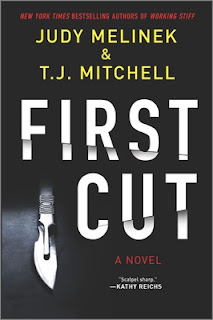 
Dr. Jessie Teska has made a chilling discovery. A suspected overdose case contains hints of something more sinister: a drug lord’s attempt at a murderous cover up. As more bodies land on her autopsy table, Jessie uncovers a constellation of deaths that point to an elaborate network of powerful criminals—on both sides of the law—that will do anything to keep things buried. But autopsy means “see for yourself,” and Jessie Teska won’t stop until she’s seen it all—even if it means the next corpse on the slab could be her own.

Dr. Jessie Teska's newest case as a medical examiner, and a new job at that, has her realizing that what was first thought to be an overdose was actually something much more - murder.

She wants to push things. To investigate. Instead she faces the obstacle of going against her supervisor. She is told to wrap things up, but Jessie just can't let it go. What is more is her work environment, now in San Francisco. She is completely nonplussed. At her previous job in Los Angeles, everything was shiny and clean. She also had technology at her disposal. Now, things are grimy, rather old school.

Adding in the suspicions about the body on her slab, how can Jessie even work? Meanwhile, more deaths abound. Jessie takes no time to connect it with the first case. Shockingly she discovers that there is an opiod crisis..Can Jessie get to the bottom of things, and stay safe in the meantime?

I love how Judy Melinek and T.J. Mitchell wrote this book. I felt like I was there with Jessie, asking questions and demanding answers. I also enjoyed that it was not too technical, even though it was gruesome at times. The fact that Melinek is a forensic psychologist helped to give Jessie's character a sense of authenticity. First Cut proved to be a job well-done, so much so that I do hope we get to see Jessie again.

Many thanks to Hanover Square Press and to NetGalley for this ARC for review. This is my honest opinion. 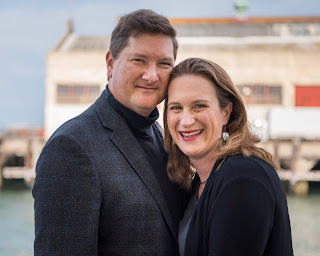 Judy Melinek was an assistant medical examiner in San Francisco for nine years, and today works as a forensic pathologist in Oakland and as CEO of PathologyExpert Inc. She and T.J. Mitchell met as undergraduates at Harvard, after which she studied medicine and practiced pathology at UCLA. Her training in forensics at the New York City Office of Chief Medical Examiner is the subject of their first book, the memoir Working Stiff: Two Years, 262 Bodies, and the Making of a Medical Examiner.

T.J. Mitchell is a writer with an English degree from Harvard, and worked in the film industry before becoming a full-time stay-at-home dad. He is the New York Times bestselling co-author of Working Stiff: Two Years, 262 Bodies, and the Making of a Medical Examiner with his wife, Judy Melinek.