When retired dance instructor Caroline Hutton disappears, the search is intense for just a short period of time. But then the search fizzles and comes to an end as no clues turned up. Her disappearance is especially suspect because her beloved dog was left behind.  With three young children and pregnant with her third, and during an agonizing heat wave, Lucy hardly has time to play amateur sleuth again as she did during the holidays, but, as before, she just cannot help herself.

The scene changes with the cantankerous owner of the local hardware store is found dead in his office. Just as with the missing woman, Lucy becomes embroiled in this case as well. When her friend Franny is arrested as a suspect in the murder, Lucy steps in to save her. Franny became the primary suspect because she was fired by her boss shortly before his murder. Meanwhile, Lucy is as busy as can be between family life and all of its connected activities.

Tippy-toe Murder was a rather intense read as it dealt with more serious topics other than the typical initial murder we see in these cozy mysteries. As with the first book in this series, Mistletoe Murder, it was a quick and engaging read. I am rating this book a four instead of the four and a half I would have liked to give it. I must say that the reason why is that there is a particularly disturbing scene, albeit brief, that I feel could have been left out of the book that I had to gloss over. Other than that, this is a solid read.

In this book we see the Lucy we've already come to love, her growing family, and other characters that we met and more we will no doubt see again in future installment of this series. Although the first few titles in this series may have been written in the early 90s, the stories seen quite relevant to me. The only problem that I have is not with the author, Leslie Meier, but with my busy schedule. I have an overfull review queue and only heard about this series just yesterday. I hope to sneak a book a day until I finish all of the titles. 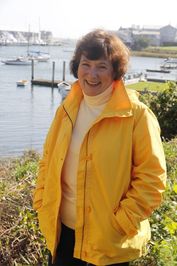