BLOG TOUR - The Wife Before Me 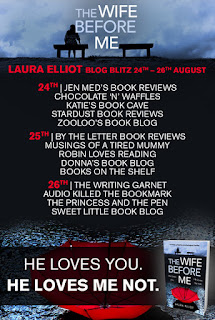 Today is my day for the blog tour for the chilling book, The Wife Before Me by Laura Elliot.

One evening as the sun is setting, Amelia Madison’s car slides into the sea off Mason’s Pier. Her body is never found.

Two years later, Elena Langdon meets Nicholas Madison. She is grieving the loss of her mother, he is grieving for his wife. Together they can help each other.

Now Elena is living with Nicholas. But Elena doesn’t really know him. She doesn’t know what he is capable of.

And she doesn’t know what really happened to Amelia.

Until the day she discovers the torn page of a letter and the words she reads chill her to the bone.

Elena must find the person who wrote these letters if she is to save herself.


A totally breathtaking page-turner about the darker side of love and what really goes on behind closed doors. This book will have you gripped from the very first page until the dramatic final twist.

Amelia Madison goes on a drive and never returns. On a dangerous incline, her car slips off of a cliff and plunges into the sea. It is now two years later, and Elena Langdon meets Amelia's husband Nicholas. It is Elena's mother's funeral and Nicholas is there as he worked with her mother. They are both grieving and yet they make a connection.

Over time, the two develop a bond, and eventually begin to live together. She is most assuredly in love with him and he claims to love her as well. However, he begins to exhibit increasingly cruel and dangerous sides to his personality, placing her very life in danger more than once. At some point, Elena begins to wonder what really happened to Amelia. Was Nicholas as cruel to Amelia as he is to Elena? Was Amelia's death an accident?

When Elena discovers a torn letter it sends incredible chills through her bones. Everything changes and she begins looking for answers. Even so, it is very difficult for her to prove just how dangerous Nicholas truly is. However, what she discovers is shocking beyond belief, plunging her into even more terror than she could have ever imagined.

I sometimes don't know who experienced more shock, Elena, Amelia or myself, the reader. I then found myself dealing with powerful emotions towards or against certain characters in this book, namely Nicholas, his mother, and even his father. This was a truly emotional read and I give kudos to the author for evoking such powerful responses in me while reading this book.

When I picked The Wife Before Me for review, I know since it was in my genre of choice, that it would most likely be a good read. It was far more than that - it was an utterly exceptional read. For starters, there were twists and turns that had me gasping for air and I just could not turn the page fast enough. I found myself devouring this book in just two sittings, pausing only enough for a scant few hours of sleep before continuing on, yes, in just two brief sittings. From the first page to the very last page, I was completely riveted. This is my first book by Laura Elliot and I know for a solid fact that she will be a definite auto-buy for me. Her writing is concise, her characters memorable and the plot lines believable.

Thank you to Bookouture and to NetGalley for this ARC to review in exchange for my honest opinion.

Laura Elliot is an Irish novelist who writes psychological thrillers and lives in Dublin, Ireland. Her novels are: The Wife Before Me, Guilty, Sleep Sister, The Betrayal, Fragile Lies, Stolen Child and The Prodigal Sister. She has worked as a journalist and magazine editor