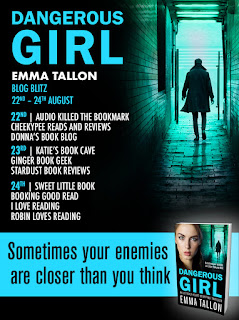 Today is my day for the blog blitz for the exceptional Dangerous Girl by Emma Tallon.

Sometimes your enemies are closer than you think

Anna is finally happy. She’s rid of her abusive ex and she’s co-owner of London’s hottest new club, with her best friend Tanya. But she is worried about her boyfriend, Freddie. He’s keeping things from her. And he won’t tell her where he goes in the middle of the night.

Freddie is furious. A girl has gone missing from one of his clubs and the police are all over him. When a familiar face turns up and threatens him, he’s offered a deal – find the girl or Anna will be killed.

With time running out, Freddie risks everything to save Anna’s life. And if there’s one thing Freddie Tyler is known for, it’s that he never gives up. Not without a fight… 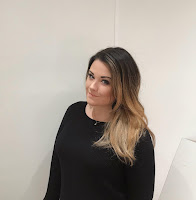 By the end of Runaway Girl by Emma Tallon, Anna Davis is finally happy. She is no longer in fear of her ex and is in a happy relationship with Freddie Tyler. Moreover, she is co-owner of a very successful London club with her best friend Tanya. But, she is suddenly worried about Freddie. She is under no illusions about his criminal lifestyle, but he is now keeping things from her and has even recently begun disappearing in the middle of the night.

Meanwhile, Freddie is more than angry. A girl has gone missing from one of his clubs and the police are certain that he has had something to do with it. Then, someone that he absolutely does not trust shows up and says that he'd better find the girl or else Anna will be killed. No matter the cost, Freddie does not want Anna to know of this ultimatum, but what's he to do when finding the missing girl goes without success and Anna's life really goes on the line? As a man who loves his own deeply and unreservedly he is not going to let any of this go without a fight.

I am really glad that I read book one in this thrilling series before reading this. It gave me a solid background as to who the characters were, and how they were all connected. As much as I loved the first book, Runaway Girl, this one completely blew me away. Although it didn't generate the same about of fear and anxiety, Dangerous Girl had a different vibe. This story has a high element of danger when it comes to what could happen to the missing girl and to Anna, but it also delves a bit more into a couple of other characters, Freddie's brother Michael, as well as Tanya.

Since this book is about the world of gangsters there is a fair level of violence, but it is also peppered with sensitivity, especially when it comes to Freddie's character. He displays a real dichotomy of emotions in how he handles his gangster activities and how he deals with his loved ones. This is a fast-paced book, one that begins feverishly from the very start and ends with the most intense conclusion. Those last chapters are truly riveting. Dangerous Girl is indeed a captivating read.

As mentioned, this is the second book in the series and there are enough explanations to allow this to do well as a standalone, but I am one who enjoys connectivity with both the characters and the storyline, thus I purchased the previous title and read it immediately before this one. Now I have to wait for Book 3 and I really don't know how I am supposed to do that!

Many thanks to Bookouture and NetGalley for this ARC to review; this is my honest opinion.
Posted by Robin Loves Reading at 8/23/2018 04:08:00 AM