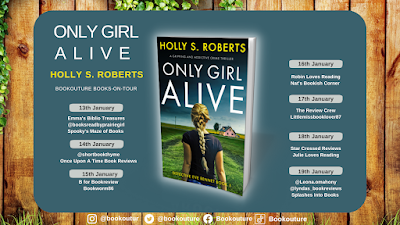 As day breaks over the Tanner family home, the house is deadly silent and the door is firmly closed. Upstairs, the whole family lie cold and lifeless in their beds. All with the same look of fear in their unblinking eyes…Detective Eve Bennet takes a steadying breath as she enters the main bedroom of the Tanners’ modest home in the tight-knit town of Hilldale, Utah. Mrs Tanner’s high-collared nightgown and her long plaited blonde hair are soaked in blood. Next to her, Mr Tanner’s hands are clasped together in a final prayer.Filled with dread, Eve forces herself towards the children’s rooms. But instead of two children, she only finds one. Where is the youngest daughter, Hannah? And why are there long scratches across the walls?Eve tracks Hannah down to her uncle’s house nearby. But he won’t let her step foot in the house. Eve knows what it’s like to be held captive by a family member, and fears for Hannah’s safety. What is he terrified Hannah might reveal?Back at the Tanner home, Eve makes a shocking discovery in the dust covered attic. Mr Tanner was hiding a dark secret from the rest of the community—the kind of secret someone would kill for.

Realizing another family could be in danger, Eve runs from the house and stumbles into the path of the one man she spent years trying to forget— and he won’t let her get away this time. Can Eve escape the evil that has haunted her whole life? And will she catch the killer before another innocent family is murdered?Fans of Melinda Leigh, Kendra Elliot and Lisa Regan will be absolutely gripped by this explosive and totally unputdownable crime thriller from a USA Today bestselling author. 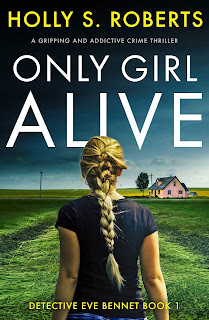 Title:   Only Girl Alive
Author:  Holly S. Roberts
Series:   Detective Eve Bennet #1
Publisher:   Bookouture
Genre:   Mystery/Thrillers
Format:   Kindle ARC
No. of Pages:   276
Date of Publication:   January 13, 2023
My Rating:   4 Stars
Detective Eve Bennet finds herself at a gruesome crime scene. There are three victims, a husband, wife and child. However, there is a missing child among the slain family. The missing little girl is ten-year-old Hannah and Eve is desperate to find her as well as to find the murderer.
This is no ordinary case for Eve. In fact, the victims belonged to a polygamous community, one which Eve is all too familiar with. This community is a harsh part of Eve’s past, especially as some of its current members have very good standing in the community. These members include the local prosecutor, Aaron, a man who was the bane of Eve’s existence when she was a child, and he is just as unpleasantly difficult now. Thus, this latest case has Eve and her fellow officers tied up in knots.
Eve faces constant danger as she pursues her case, as she must go against the tenets of the religious community. The circumstances of polygamous marriages, and this involves girls forced into marriage at a young age, are very disturbing in this first book in a thrilling new series by Holly S. Roberts. Eve’s past was tragic, and knowing what goes on in that group makes Eve work extra hard in trying to identify the killer. Full of tension, surprises and a shocking conclusion made Only Girl Alive a nail-biting one-sitting read.
Many thanks to Bookouture and to NetGalley for this ARC for review. This is my honest opinion.
Please enjoy my YouTube video review - 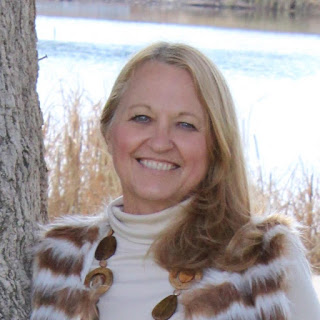 Holly Roberts began writing to alleviate stress in her day job, that of a homicide and sex crimes detective. Romance was her go to genre because she required a happy ending. She also touched on cozy mysteries and added six books to her forty book romance repertoire. Now that she’s retired and her mind at peace, she decided to delve into crime thrillers using her background and thirst for research to write the Eve Bennet series.

Holly has two movie/television options under her belt for her amazing life story. Part of the reason is Holly became a police officer at age 45 and led two high profile cases, one involving a serial killer. Now she enjoys the excitement of writing about crime while sitting at home with her two dogs, laptop, and a cup of hot tea close by.
Social Media
Facebook: https://www.facebook.com/hollysrobertsauthor
Twitter:  https://twitter.com/hollysroberts
Website: http://wickedstorytelling.com
Instagram:   https://www.instagram.com/hollysrobertsauthor/
Bookouture Email Sign Up: https://www.bookouture.com/holly-s-roberts/